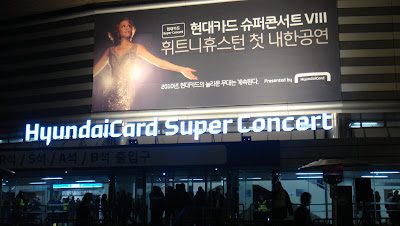 ’s Comeback Diva, Whitney Houston kicked off her Nothing but Love World Tour right here in on Saturday evening, February 6 2010. This is the singer’s first international tour after ten years and screaming fans didn’t have to wait long before she appeared on stage. It was also the first time she performed in the country. 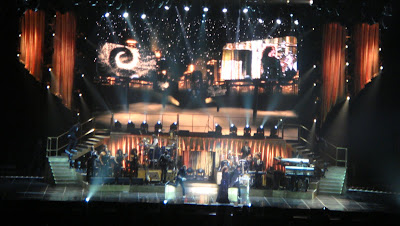 Dressed in all black, she opened with a track from her latest album, I Look to You. The crowd went crazy when in her husky voice, she said, ‘Gam-sa-ham-ni-da’ (Thank You in Korean).  She complimented her band and backup singers on how good they were looking and then spoke briefly about the late Michael Jackson, who ‘gave’ her two of his backup dancers who were performing with her on stage.

Before singing My Love is Your Love, she told the audience that the song was written by Wyclef Jean, whose family has been affected by the earthquake disaster. She asked everyone to keep those in in their prayers.
“Ya’ll got soul,” she said – playing on the city’s name () and a few times when someone yelled, “I love you, Whitney”, she replied, “I love you much more”. 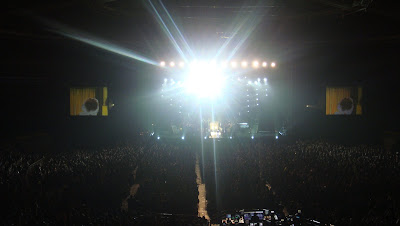 Halfway during the show, she needed a costume change and said, “I’m wet. It’s cool up here, I need to change so that I don’t catch a cold.” For the next ten minutes, the audience watched a montage of clips from her music videos dating back to the ‘80s, with big hair, pink lips and neon clothes with shoulder pads. 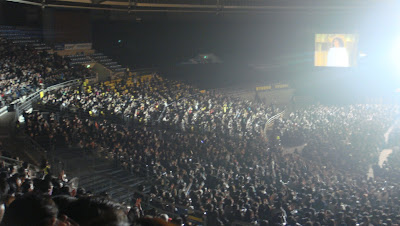 Her return on stage for the second half of the show was nothing spectacular. She stood waiting patiently for the props to be organized on stage and said, “Those guys are doing a lot of work out there.”
This time, dressed in a long white coat under a black pants and top, Whitney took her seat on a high chair and said, “I want to sing with you, be intimate with you, take my time and sing songs that go back 25 years ago.” 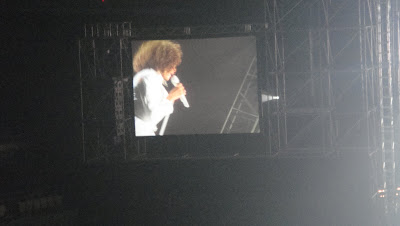 Said to be the reigning Queen of the pop and R&B genre, Whitney made her comeback last year with her latest album, I Look to You which commemorates 25 years since her debut album.

“I don’t know if I should tell you this, but it’s been 30 years since I’ve been in this industry”.
“It seems like just yesterday,” she crooned and went on to remember her friends who’ve passed on over the years, notably the King of Pop himself, Michael Jackson. 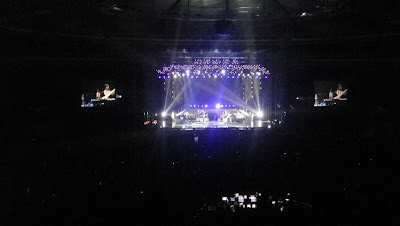 Whitney sat perched on her chair as she sang a few of her hit numbers from over the years including Greatest Love of All and Exhale from the 1995 film Waiting to Exhale which she starred in opposite Angela Bassett and Loretta Devine.
The entire mood of the show took a 360 degree turn when Whitney said, “I wanna dance” before she lit the stage on fire with her hit number, I Wanna Dance with Somebody from the 1987 album, Whitney.
For me, the show took another surprising turn when she said, “I don’t know if you know this, but I love the Lord” as she sang a gospel song walking from each side of the stage to the other flailing her arms in the air and throwing her head down. I didn’t know that growing up, Whitney was a member of the Junior Gospel Choir at her church. 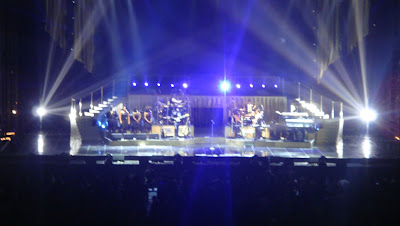 She made mention again about the breeze moving across the stage and said, “Whitney doesn’t like to sing in the cold, but I’ll stay here for you.” This was just before she broke into her second dance number for the night, Step by Step from the 1996 film, The Preacher’s Wife which she starred in opposite Denzel Washington. This got the crowd on their feet and some even gave her a standing ovation.
There were a few times when she coughed during her songs. One could tell this was her first concert after a decade and she can’t be blamed for feeling nervous about this, right? There were no particular choreographed moves or dances. Many times, she just walked across the stage waving her arms at the audience as she relied on her backup singers and dancers to carry some tunes. 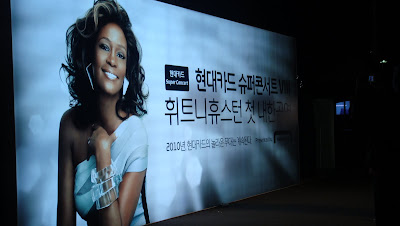 For the show’s finale, Whitney belted out her famous number, I Will Always Love You from her film debut, The Body Guard – a romantic thriller starring Kevin Costner. As the show ended, she got on one knee with her hands clasped together and head bowed down.

She said that even though was cold (weather wise), she appreciated the warmth of the people.
After a few minutes, she came back with an encore of Million Dollar Bill.

Whitney will give another performance on Sunday evening, February 7 2010 in before moving to for next leg of her tour.
at February 07, 2010

What a great description of the concert. Thank you so much! I love how you called her the Queen of Pop&R&B b/c she is just that. Can't wait til she tours the states.

Miriam:
Thank you for reading this! I'm glad you enjoyed it and hope you get to see Whitney soon :-)

thanks for taking time to wright all this blog!!!
I´ts great...

thanks for sharing with us. i enjoyed reading your post and wish i could have joined you to the concert. im happy you enjoyed it. your posting was very informative.

the pink cat:
Fabulous! Hope you enjoy it :-)

Well writtten Sheetal, very informative, I like her singing and just hope she is over the worst in her life..
Kishor

Thanks for reading this :-)

Unfortunately, she didn't get a good review from the Korean press, and fans were disappointed with her performance.

actually, I saw several tweets from Korean fans who loved her performance and had a great time so...it's subjective

Second night- saving all my love and greatest love of all

Listen for yourself- Whitney sounded incredible. I think that the second night was better vocally and productionwise but that is to be expected with a new show. The kinks have to be worked out.

Anonymous 1
I agree, it is subjective!

I was understanding of the fact that it was her first show, an audience she's never performed for before and she wasn't well. Thanks for visiting :-)