I love cool architecture and Beijing has some awesome buildings which I managed to capture while on the bus. Here are a few of them. I wish I knew what buildings they were, but I took these pics while driving past. 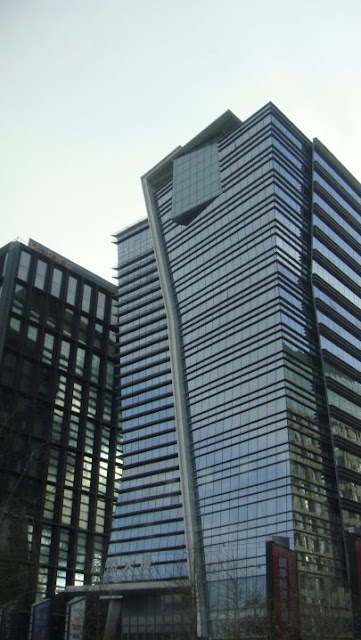 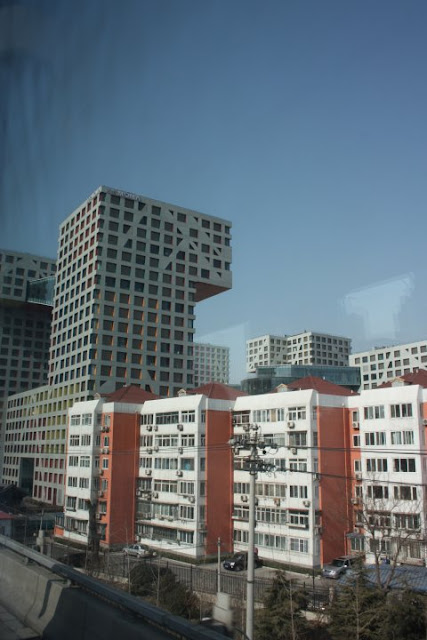 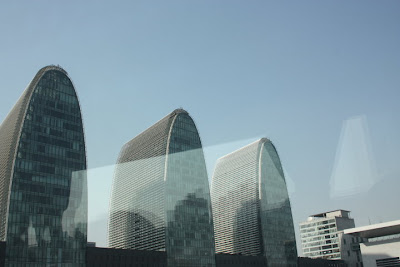 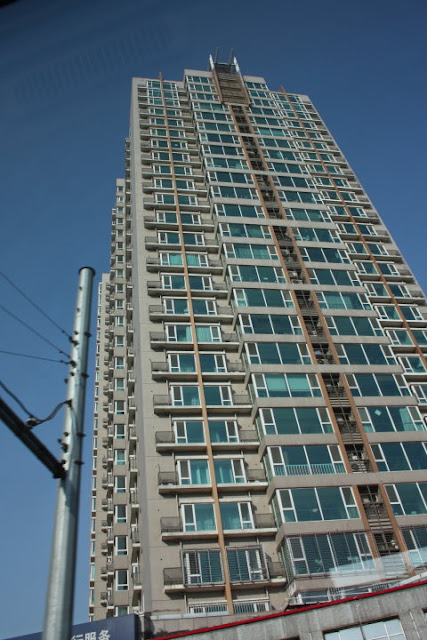 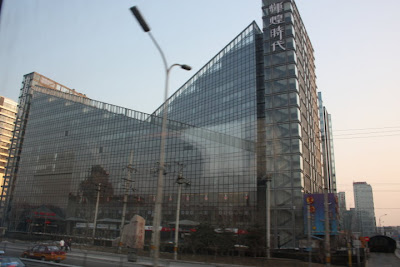 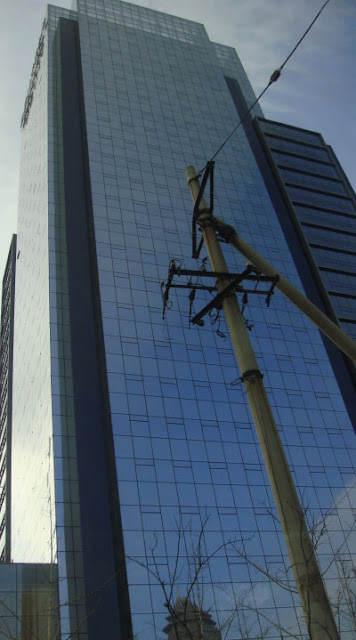 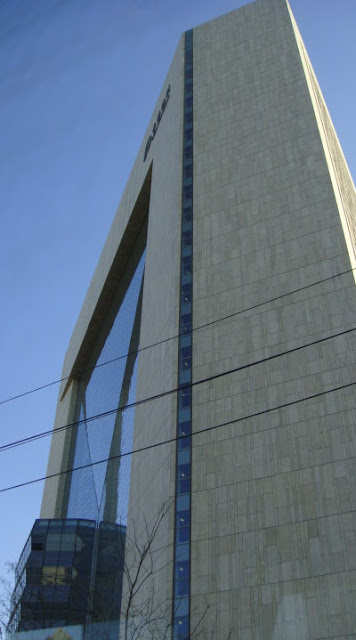 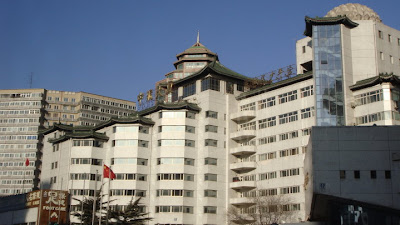 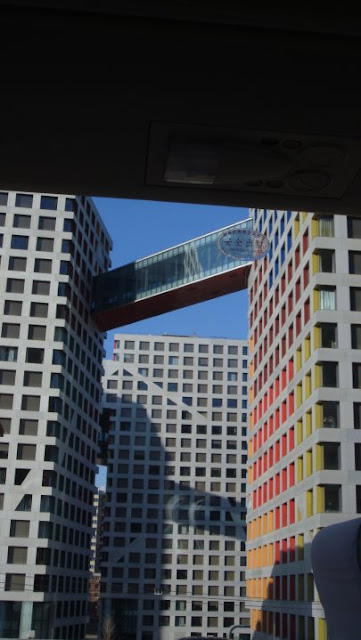 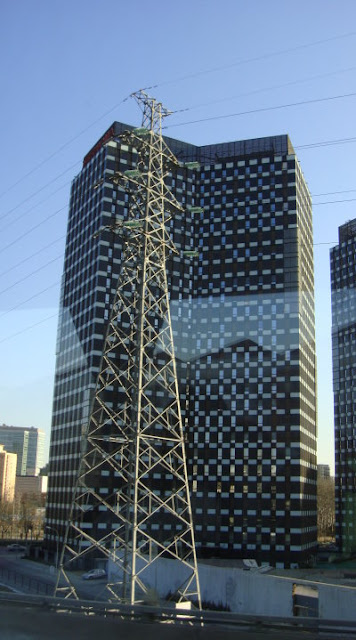 My week-end in Beijing has come to an end and we are at the airport. Jenifer walks us in right through to our check-in desk. After saying goodbye to her, everyone checks in individually. I'm really surprised to note that not a single person greets each other. Everyone really kept to themselves in this group (14 of us). 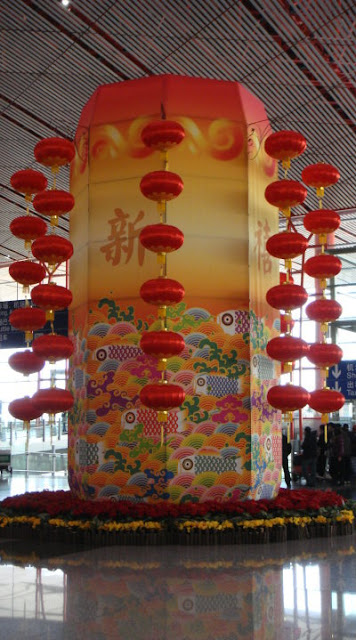 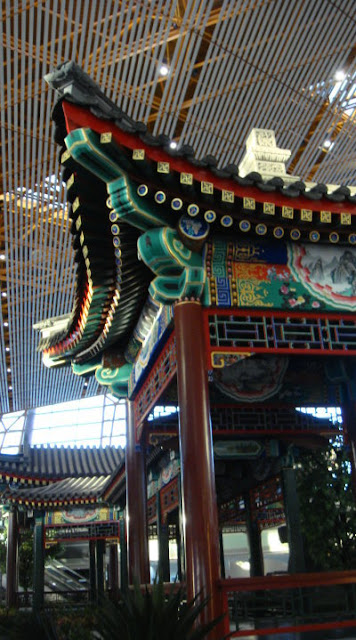 It's still a very long time until we have to board and I'm still feeling very cold. I have no intention of shopping, but walk around anyway. After about 45 minutes, I head to my boarding gate. This airport is really big and takes forever to arrive at the gate.  Once I'm there, I see some people from my tour group, but they don't look up.

We still have to take a bus to the aircraft. I'm one of the first people on board, and I pray that no one asks me to move my seat. This is my (vegetarian) dinner: A slice of cucumber one one finger looking slice of white bread, and a slice of tomato on the other. Sigh... 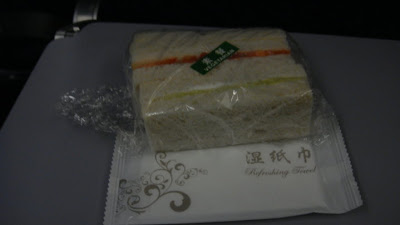 When we land in Incheon, I rush out quickly since I'm sitting near the front of the aircraft. I didn't check in luggage so I head straight for passport control. After that, I'm also relieved that customs don't stop me (they usually do).  The father in the group (visiting from Canada) passes me and touches my arm saying, "It was very nice to meet you." I tell him it was a pleasure meeting him too and when I turn to greet his daughter, she doesn't even smile. I knew she had an attitude problem from the first time we spoke at lunch on Saturday afternoon.
I still have to buy a ticket to get home. Standing in the bus queue, a man says I could go in front of him. I thank him in Korean and he starts a conversation - in Korean! Thank goodness I can understand the questions and reply with the correct answers. Basic things like where I'm from and where have I just arrived from. I was quite chuffed because he thought I was a student ^_^ 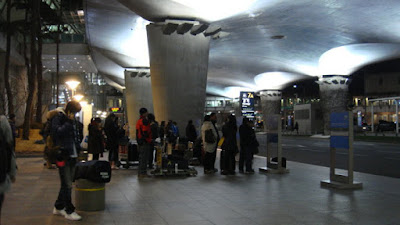 i managed to read the entire beijing posting and i really enjoyed it so much that i may just go back and read it again. thanks for sharing all your experiences with us. you are a blessed soul.

ANONYMOUS:
Thank you so much for your kind words~ Love you too ;)