I decide to go up to the deck for some fresh air and listen to music. I don't last there very long. No one is there - probably because it's very cold.When I go back inside, I see the guy who runs the gift / jewelry store on the boat. He's sitting with Mahmoud, the photographer. He's uploading the photo's he took earlier.

They invite me to sit down where they are. As we're talking, Mahmoud looks very busy on on his notebook editing his photos on Photoshop. He's editing the photo he took with me! He asks the other guy something in Arabic, to which he replies, "Love Story" and Mahmoud types this on the screen.

After a while, I decide it's time to go to bed. I have to be up early tomorrow morning. We've got a tour that's taking place before breakfast.

When I go back to our cabin, my mum tells me that another guy started talking to her and was...well...flirting with her! Apparently he thought we were sisters (?!) His name is Sami...and he wants to meet her tomorrow on the sundeck. Hmmmm.....


Here's the pic he edited, printed and gave me as a gift! 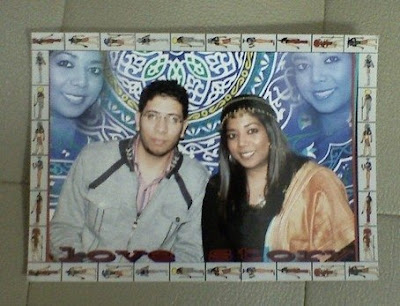