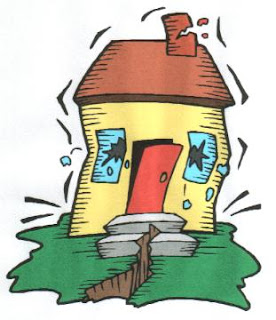 Image taken from Google Images
On Tuesday evening, just after 6pm I was sitting downstairs working on my netbook. For a second, my walls rattled. At first, I thought my my neighbour dropped something heavy. Our walls are pretty thin, so I thought that was the sound I heard. But then a strange sensation happened. It felt like my apartment moved.

I was busy emailing and was about to update my Twitter status with a message along the lines of, "My apartment moved. Should I climb under my table?" But I got distracted doing something else and didn't update it. I didn't think too much about it, but and decided to watch a movie.

A few minutes later, my friend Joo-hyeon calls me saying, "I'm in Seoul, but I heard there was an earthquake in Siheung, so... are you OK?"

I couldn't believe it! I was really afraid to sleep that night. What if something happens while I'm asleep? Should I sleep downstairs rather? In my apartment, I have stairs leading up to a landing - my TV, desk and bed are up there. Anyways, of course I eventually fell asleep and was very relieved and grateful to wake up the following morning!


Even though it was 'only' a 3.0 magnitude, it was still strong enough to be felt.

This story ran in the Korea Times


A magnitude 3.0 earthquake occurred with its epicenter located just outside western Seoul, Tuesday evening. Some citizens, apparently alarmed by a recent major tremor that hit Haiti, called fire stations and media outlets for confirmation of the temblor, although no injuries or serious property damage were reported.

According to the Korea Meteorological Administration (KMA), the earthquake occurred at 6:08 p.m. in an area about 8 kilometers north of Siheung, a satellite town in Gyeonggi Province on the outskirts of the capital.

``The tremor continued for two or three seconds,’’ the administration said in a briefing. Residents especially in western Seoul reported that the quake was strong enough for them to feel the buildings they were in shaking.


The tremor was felt as far away as Yongin, Suwon and Goyang.

It was the strongest tremor out of three recorded in the bustling capital city of 12 million since 1987, when the administration began to monitor earthquakes in Korea. The other two occurred on Sept. 15, 2004 and June 14, 1990, but again they caused no damage.

A 31-year-old man, who was working at an Internet start-up in Siheung, about 40 km southwest of Seoul, told The Korea Times, ``I was startled, when the windows of the building I was in were trembling and I also heard some noise.’’

The quake was the seventh to hit the Korean peninsula this year alone, the KMA added.