After dinner, back in our cabin, my mum tells me that she met Sam at the reception area. He's flying back to Cairo tonight. He asked my mum to say "bye" to "Gizzella". My mum told him that I'd be up on the deck later. 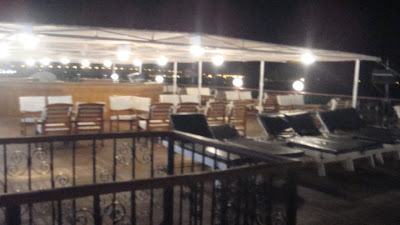 Just before 10pm, I go up to the deck. It's not as cold as the previous night, so I intend to take advantage of the calm evening and relax with my music. There are boats docked on either side of our boat and there are workers hustling around on them. Our deck is deserted, except for about 3 other guests.

In a few minutes, guess who pitches up on the deck?

He takes the seat opposite from me. For a couple of seconds, he just looks at me.

I cross my brows and tell him, "If you want to tell me something, you tell me here."
"Let's go there," he says.
"I'm not going there, so you either tell me here and now or I'm going to go." (Where did I learn to talk like a hard-ass-cold-biatch?!)

It doesn't seem as though he's blinking. His eyes are fixed on me.
He says, "I want to tell you something on your lips."

He moves to the seat next to me. I look at my watch and tell him that he should be going downstairs to head to the airport.

He puts his right hand on my left knee and asks me to go with him "over there".
I take his hand from my my knee and place it on the table in front of us.

"Gizzellaaaa" he says - long and drawn out. "You are beautiful. I want to talk to you from the first day I saw you."

I look at my watch again and tell him that he should be getting going before he misses his flight.

At this point, I've already calculated the distance from where we're sitting to the stairs going downstairs. I know I can run faster than him, if I have to!

I tell him that I'll walk him downstairs (Where there are people).

Looking like a disappointed puppy, he follows me as I walk briskly down the stairs.

He still continues to look at me, and I refuse to make direct eye contact with him.

Of course, you must remember that this doesn't matter at all in Egypt. Islamic Egyptian men are allowed to take more than one wife if they wish, and if it's permitted. So the question, "Are you married?" turns obsolete.

Sam, finally realizing that I'm not going to give in, gives up and takes my hand to kiss it. He hugs me, goes downstairs and I go back to my cabin to tell my mum about it.

It would have been the perfect story to tell people...I was on a boat... on the Nile River...under the stars...but, Hell to the NO! Anyways, it DID make for an interesting blog post, right?! 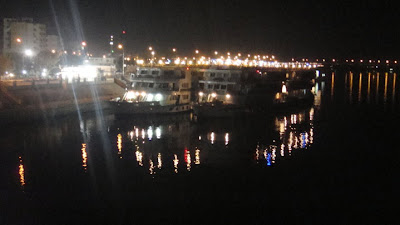 i loved the story of sam and laughed so much and wish you were awake so i could call you. i remember everything. i wish i could go back.