Mum and I get ready for dinner and the Galabya Party. Some people are dressing up in traditional clothes. I don't want to buy a galabya (traditional dress) so I decide to just wear the headpiece I bought at Kom Ombo.

I see Mohammad, and he tells me to meet him on the deck after I'm done with dinner so that he could give me the airtime recharge voucher.

Before we enter the dining area, there's a photographer taking photos of guests against a simple background and two sheesha's (hooka's/bubbly) as props. I've not seen him on the boat before, but assume he's just come to take photos, and doesn't stay on the boat. His name is Mahmoud. My mum and I take a photo and then he asks if he can have one with me.

At first, this strikes me as a bit odd. Why would he want one with me? I figure he's just being friendly. He asks my mum to take the photo with his camera. 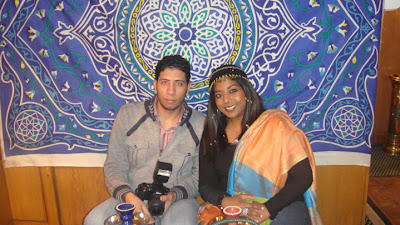 Dinner is traditional Egyptian food... delicious! I'm very lucky on this trip that I have a wide choice of vegetarian options. Chef Abdul, who earlier told me that my eyes and lips are beautiful, is winking at me a lot. He doesn't look at me. He stares. As I'm getting my salad, he leans over from behind the counter and says, "I want to kees [kiss] you."

I have to bite my tongue from laughing and just tell him, "You're crazy!" 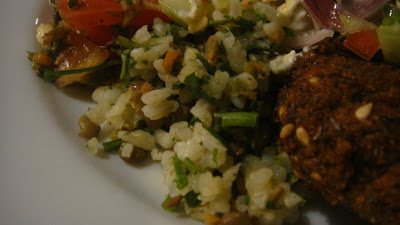 During dinner, he passes our table a few times and when I look up, he puckers his lips like a kiss. I really can't believe how these guys are not shy!

Before I go to the Galabya Party, I go up to the deck where Mohammad is. Tariq, the security guy is also up there. While Mohammad is trying to load my airtime, Tariq stands just staring at me. I try to make some kind of conversation with him, but he doesn't speak English.

I have my camera with me and I want a photo of them. They agree, but they ask to have a photo with me as well.  Tariq surprises me when he stands next to me for a photo. His hand starts to wander down my back and when it reaches the lower part of it, I grab his wrist from behind and give him a look to say, "What the hell? Are you serious?" Again, I can't believe the guts that these Egyptian guys have! 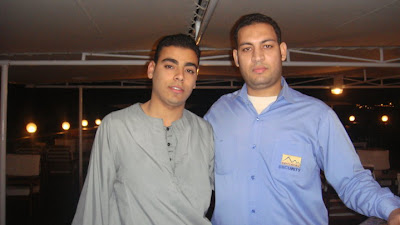 After my airtime is recharged, I go downstairs. Mohammad's also going downstairs. When we're inside the boat again, he asks me, "You like Tariq?"

"No!" I say.  And then, walking down the spiral stairs, sweet innocent-looking Mohammad surprises me when he says, "I want a kiss, it's ok?"

Ummm, NO - it's certainly not ok. I'm not one of those girls. When I tell him no, he quickly says, "Please don't angry me."

I don't angry him. Again, I just take it as one of those things that give me an opportunity to write about - as I'm doing now, or tell as a funny story in the near future.

I go back to the Galabya Party which doesn't last very long. When it's over, I'm not tired. Everyone goes back to their cabin, including my mum. I don't want to sleep just yet. I'm not tired, and I can't go to bed if I'm not sleep. 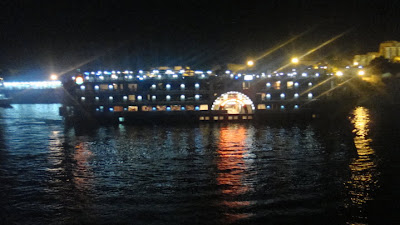