Dancing is one of the major components in Bollywood films. Whether it is the awkward movements of Sunny Deol or the fluidity of Hritik Roshan, dance continues to play an important part of the Bollywood culture. No doubt a brilliantly choreographed song can make all the difference between the success and failure of the film.

Back in the day of black and white cinema, dancing around trees playing peek-a-boo was inevitable. Not forgetting heroes and heroines being drenched in the rain as they sang and danced sensuously to each other in secluded streets. But times have changed and today good dancing means being able to gyrate your hips and yet be graceful at the same time.

Here, I present the best, worst and most improved dancers in .

When we think of dreadful Bollywood dancers, a classic example is easily the Deol family! Although Dharmendra was popular in the 70s, he was also known for his clumsy dance sequences. However he still remained one of the most respected actors in the industry. His older son, Sunny Deol continued his father’s legacy of bad dancing in the 80s, but still managed to remain one of the best action heroes. Probably one of his most embarrassing dances were in Jeet (1996) alongside Karisma Kapoor. Luckily, his younger brother, Bobby Deol

proved that he doesn’t have two left feet! Sure, he may not be a Hrithik Roshan, but at least he doesn’t carry the reputation of his father and big brother!

During the 90s, actors like Akshay Kumar and Sunil Shetty were in the limelight. Although Shetty got a lot of criticism for his dancing, he managed to hold his fort throughout the decade. Today his career is soaring and he is even running his own production house.

The 90s also saw the rise of stars like Hrithik Roshan (Kaho Na…Pyar Hai) and Abishek Bachan (Refugee) – who both debuted in the same year. Roshan received immediate recognition after his solo performance in Ek Pal Ka Jeena, while Bachan’s dancing was described as ‘awkward’ and ‘gawky’. But he has definitely proven that a little practice makes perfect, having some of the biggest hits being picturized on him (Dus bahane, Kajra re and Nach Baliye).

Other stars of this generation include sisters, Karisma and Kareena Kapoor who have both been commended for their dance moves. Karisma gave some of her best performances in Dil To Pagal Hai, opposite Shah Rukh Khan and Madhuri Dixit. One of Kareena’s famous dances are with Hrithik Roshan – especially You are my Sonia in Khabi Khushi Khabi Gham. Shilpa Shetty has also been noted for setting the screen ablaze with her fiery dance sequences, which can be seen in Jung opposite Sanjay Dutt.

well-accomplished dancers. Dixit has made numerous hits with outstanding dance performances, including the awesome Kay Sera Sera in Pukar with elastic-man, Prabhudeva while Rai has definitely made her mark in the industry over the past few years. Her snaky movements in Bunty aur Babli’s Kajra Re is one of the factors of the film becoming a hit. The two Bollywood queens shared the screen in Devdas, with their mind-blowing movements in Dola Re Dol.

King of Bollywood, Shah Rukh Khan almost needs no mention. He never fails to impress. He can be sexy and seductive or simply cute and charming. Some of his memorable dances are in Dil To Pagal Hai, Khabi Khushi Khabi Gham and more recently in Kaal. 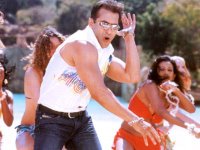 Although they have the entire female population going ga-ga over them, Arjun Rampal and John Abraham are yet to prove their dancing talents to us. Despite the fact t

hat he is one of the biggest stars in Bollywood, Salman Khan’s dancing does not impress. If you look carefully, dancing looks like an effort for him and even resembles aerobics!

Bollywood stars also get to prove whether their on-screen performances are as energetic off-screen with stage performances. Many stars are known for their unforgettable stage shows. Some stars that blew my mind away with their performances on stage are the likes of Hrithik Roshan, Shah Rukh Khan, Akshay Kumar, Madhuri Dixit, Rani Mukherjee and Lara Dutta.
at August 29, 2006

A fun overview of filmi footwork! I'd never noticed that Hrithik and Abhishek both debuted (as grownups, anyway) in 2000. Interesting! And I'll be intrigiued as to whether any of your opinions on various stars' dancing abilities will set off any arguments - such things often do!

So would I, Beth! In fact...I'd especially like to know what the readers of Beth Loves Bollywood think of it ;)

Hi Sheetal,
good post! As much as I love Abhishek, I have to agree that he is a clumsy dancer, but to me, that only makes him more endearing, because I'm a terrible dancer too (actually, compared to me, Abhi would look like Hrithik!). Well, I thought he was great in all the dances in B&B, but after seeing the Making of Where's the Party Tonight clips, I wondered if Karan will manage to make him look presentable in the movie ... which he did, with lots of quick cuts :)

Yes - Bachan Jnr is quite endearing, isn't he?! I can't wait to see him in "Where's the Party Tonight" - I am yet to see KANK!

I really enjoyed this! And would love to see a post on dancers who are stars in their own right, but aren't lead actors. Helen, for instance.

Do you mean something like 'item babes'? Helen, as you said...and maybe also Malaika Arora? That's already on my list for an upcoming feature story. They are becoming increasingly popular in Hindi cinema, arn't they?

Thanks for visiting...hope to see you again soon :)

Madhuri will always be a classic, won't she?! I must agree with you on that one.

I'm glad you like my blogs new look!
..hope you're doing well, chat to you soon :)

I must agree with you on Madhuri always being a classic. She's amazingly wonderful!

Wanna Get HIGH? Running out of Supply? Then Check Out My Shit!
>>>>> http://bestlegalhighsdrugs.info <<<<
If you have questions, you can email my boy at online.mentor [at] gmail.com

i seriously enjoy your posting kind, very attractive,
don't give up as well as keep penning as a result it just that is worth to look through it,
looking forward to looked over more of your article content, have a good day!

I am Sabrina Rojas, Affiliate Executive of usainstantpayday.com, world’s largest bad credit loans community. I came across to your site and I must say that you have got an amazing site that has attracted a lot of visitors including me. I would be glad if you join our affiliate program because your site has full potential to send traffic to my website.
The highlights of our program are:
1. Absolutely FREE registration.
2. You put up a banner or text link or lead sign up form on your site/blog/forum and send traffic from your site/blog/forum to our website. You can also promote via means of email marketing, PPC, telemarketing, etc
3. We will pay you $25 for each lead. (Affiliates are earning up to $1500 per week with our program)
Please note that we try to contact the leads 7 times before marking it a dead lead.
So what are you waiting for? Join Bad Credit Loans Program and earn dollars!! http://www.usainstantpayday.com
For more questions please visit [url=http://www.usainstantpayday.com]http://www.usainstantpayday.com[/url]
This Program will definitely help both of us mutually. You send your potential visitors to our site and we pay you for this.
Please note that for doing email marketing you need to approve the email from us as we do not want any kind of spam activities to take place.
Looking forward for a long term business relation
Thanks,

This forum rocks.. I really liked it...

folks, great web page
how to write blog posts which smash in your readers:
http://tinyurl.com/ykwd7r3

Depending on what your destination is and how long you plan on making your trip for, the airfare may be the priciest expense. Because of this, finding a great deal on the airfare becomes extremely important. The more money you are able to save on the plane tickets, the more money you will be able to use toward your actual vacation.

When it comes to purchasing your airline tickets, the sooner the better. This goes for basically anywhere you plan on traveling. When you purchase a ticket sooner, lets say several months before the trip, there will be less of a demand, which will drive the price of the ticket down. However, on the flip side, as the day of the desired flight approaches, the flight's seats will begin to fill up. As fewer and few seats become available, the higher the demand will be, which will drive the price up. Booking the flight in as far advance as you can may save you hundreds of dollars in the long run.

Flying during the middle of the week is generally the cheapest time to fly. Fewer people travel during mid week than on Friday through Sunday. If at all possible, fly out on a Tuesday or Wednesday. You may actually find prices significantly less expensive on the Wednesday than the Sunday of the same week.

Looking for airfare online will probably be your best be at securing the cheapest possible flight price. There are multiple booking agencies which specialize in finding the cheapest airfare. However, to save time, go to Bing.com, which offers a comprehensive flight search option. Bing will search other travel sites (Expedia, Priceline, Hotwire, etc.) and display the cheapest flight form each site. From here you will be able to decide which website offers the best deal.

Students can often find discounted airfare by visiting STA.com. This is the Student Travel Association, and it can sometimes find less expensive airfare for the traveling student. This isn't always the case, but it doesn't hurt to look.

I am a really big fan of escort

If anyone can tell me other escort agency sites, I would appreciate it.