Thoughts & Questions of a 'teacher' 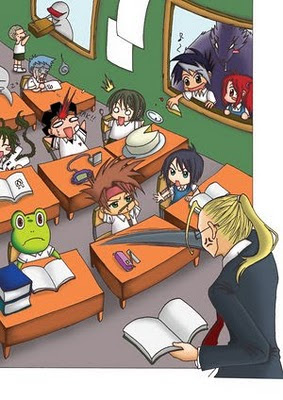 From Google Images
"I feel very...I don't know...happy when you teach with me."

My co-teacher (KH) said this to me a few weeks ago. What a nice thing to say, I thought. I teach 3rd & 4th grade with her on Monday and Tuesdays.

The other teacher in the office, who I teach 5th grade with on Friday, said she feels the same way when I teach with her...only to realize that they both felt "happy" because I teach the majority of the class. I bet they didn't know I understood that they said "it's really tiring." So in other words, for these particular teachers, they treat the days that I teach with them as "rest days".

On April Fool's Day, I sent a joke text to a few friends and colleagues saying that I was suddenly going back to South Africa that weekend. The next day, the first thing KH said to me was, "I thought, how will I teach the classes alone?"

It's nice to feel wanted or needed, isn't it? But this is what I have come to realize:

Recently, I have been feeling very drained after my classes on Monday's and Tuesday's. What used to be my favourite day of the week (Monday) has turned into a day I dread because I teach raucous 4th graders. Don't even get me started on Tuesday's where I teach 3rd graders. Yesterday was particularly hard for me. Apart from not being 100% physically well, my classes gave me almost an out-of-body experience. Running, screaming, jumping, shouting, screaming children. KH just looked on, or if I gave her a look of desperation, she'd scream at them. If you want to imagine her voice, think Fran Drescher in The Nanny. Ok, got the voice? Now turn the volume up to the max! Yes, she's loud.

I was meant to go to the movies after work yesterday, but canceled and went home to sleep. I can't remember when last I slept that early, but it felt good. This morning I woke up pretty refreshed and even managed to write an article before getting ready for work.

There are a number of co-teaching methods teachers can utilize. When I started teaching, I remember my co-teachers at the time saying that they wanted the lessons to be split 80/20 (majority of the time going to me). I had no problem with that, because while I taught, at least there was a Korean teacher helping me with the discipline of the kids - especially the younger ones.

Over time, I realized I could teach a class entirely on my own. Of course, each class is different - and I teach 25 classes a week (including Kindergarten). Some classes, like a particular 5th grade class I have on a Friday are an absolute pleasure. I just love ending my week with them - they're so attentive, respectable and active during activities. Other classes make me want to emit steam from my ears.

This is my first year teaching with KH. She's very bubbly and generally fun to talk to. As another friend and colleague told me, KH has her "holes" (faults), but I overlooked them. But as my energy and nerves started wearing out, I began to notice things. When I'm teaching, she's faffing around with papers on her desk or not helping me reprimand the children when I need it the most.

Come 4:40pm, I drag myself home and will myself to exercise to get my stiff body moving, while KH bounces home seeming quite full of energy. Why am I more tired than she is?

Only people in the teaching profession - especially to YL (young learner's) - will understand what a physically-demanding job it is. Not only do I use my voice and energy when speaking, but I use my body. Remember, teachers to YL are also performers. We have to sing, clap and dance to get them [students] excited. In other words, we have to make complete idiots of ourselves at the front of the classroom!

So while I'm doing the Hokey Pokey dance at the front, I'm also trying to get the students at the back to participate or I'm trying to stop ABC from fighting with XYZ (there are a couple of these going on simultaneously). Then, it's time for worksheets and as I go around checking 36 little bodies whether or not they're doing their work, I have to deal with students who don't bring their books to class or who sit there dumb-founded because they don't have a pencil and don't ask for one.

This raises another issue for me.

At the beginning of the academic year, I was told that the principal said that students from our school (who are now at middle school) were very poor at writing in English and were generally low. This made me feel terrible. I'm the only foreign teacher at the school. I have 40 minutes per lesson with each class once a week. 40 minutes is just the time between bell-rings, the actual learning time can arguably be 25-30 minutes. There are about 36 children in each class. How do I - one person - ensure that every single child leaves my classroom having learned something from my lesson? What about the child that never brings his books to class? What about the child who's falling asleep because he was at hagwon (special learning academy) till late last night? What about the child who can't concentrate because they didn't eat breakfast?

Yes, they are children. If anyone should know that, it's me. I can't treat them the same way I'd treat high school children. Of course not, but I do think that there needs to be a certain amount of discipline that should be carried out. If I, as the foreign teacher am expected to teach something to approximately 1000+ kids I see every week, I certainly can't be breaking up fights between A & B or reprimanding the boys at the back to pay attention to me. Is that not why I have a co-teacher?

Yesterday as I was reprimanding a class, a group of boys were still talking over me. I told KH about it, and she just smiled at them - before telling them to be quiet. This really pushed my buttons.

During an earlier class, KH had to go downstairs for something so I was left alone with a particular class. I was very strict them and for the 10 minutes that I was with them, they were pretty good. Enter the Korean teacher, they went back to their usual behaviour.

Is there a confusion of authority?

This got me thinking > If I'm to teach a class, let me teach entirely alone with my own rules for things like discipline. Or, if I'm to teach with a co-teacher it has to be a 50-50 effort during the 40 minute lesson.

So I need to explore this area a bit more > How much authority does a foreign teacher / English Language Instructor have in a classroom? In a co-teaching situation, who should control the discipline? Do such people deserve the title of 'teacher'? What does it mean to be a 'good' teacher?

I am by no means a teacher, so I sadly cannot comment from my own experience. My sister does teach, though, and many of your frustrations mirror hers. We have only lived in America, where we were born, and she teaches in the Southern part of America, not too far from where we were both raised. Still, I can't help but think that teaching presents its issues no matter where you are, or live, or go, or co-teach with.