Wednesday, May 5 2010
There are various things I consider when looking for a hotel, like its grading and price, location - including the distance from the airport, extras like internet in the room etc...

The reason I chose the hotel I stayed at on Hamdeok Beach was because of its location. It was a 3-star hotel so I assumed it came with all the basic amenities in the room. Also, when I made the telephonic booking, I was relieved that the lady spoke English so there was no misunderstandings or confusion.

After arriving at Jeju International Airport, I took a cab to the hotel. The drive was about 30 minutes. The only person at reception was a round-bellied middle-aged man with a receding hairline and glasses perched on his nose. After filling out the check-in form, I asked him about a few things, like is there a place I can get a massage? What about a sauna nearby?

He pointed ahead to an orange-red building and told me there was a sauna on the second floor. He was also very kind to book a massage for me for the following day.

My room was on the second floor. I wanted one higher up, but nothing was available. I had a sea view room and marveled at the water. The sky was still a bit grey, and Mr Kim - the man at reception, told me it would rain that evening. 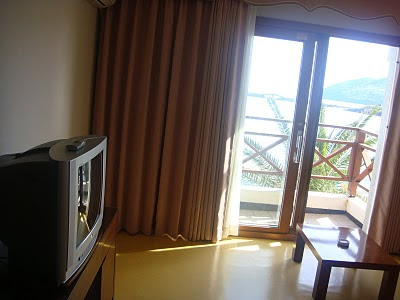 Now, onto the hotel room:

The view was pretty good, but the noise from the traffic from downstairs was a bit bothersome.

There was no bedside lamp so I couldn't read in bed in the evening. The main light switch/air con control was not user-friendly.

In the bathroom, there was no shower gel or shower cap. Just a lousy small cake of soap and 2 small bottles of body lotion.

There was a kettle, with two cups and two sachets of green tea - no sugar, coffee, creamer or spoons.

There were toothbrushes, toothpaste and shampoo which would be added to the bill if used.

There was a mini bar - consisting of two bottles of water and a few energy drinks.

The internet cable (complimentary, but I never believe that - it's obviously worked into the price!) was tucked into a cupboard under the TV set. It worked fine with my netbook, but the cable connection was very loose and kept falling out of the socket.

The telephone had nothing indicating which buttons were for which services. For example, I wanted to call the reception desk, but didn't know which button to press so I had to physically go downstairs to make an inquiry.

A continental breakfast was included and I was given two coupons which I'd have to present when I went down to the restaurant the following day.


View from my balcony: 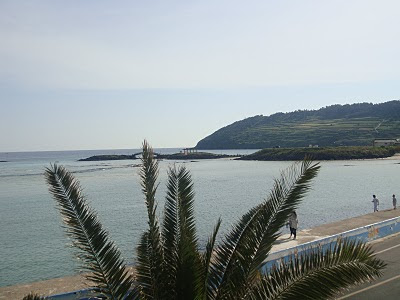