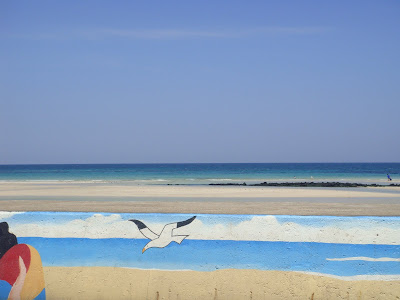 It was getting a bit chilly at the beach and beach sand was beginning to fill my handbag so I thought I'd stroll back to the hotel and maybe head to the airport. Perhaps I'd be lucky and get an earlier flight.

Confession: As I started making my way back to the hotel, I couldn't leave just yet! I was literally a few meters away from the hotel when I turned around and went back to the beach where I stayed for about 30 more minutes. I just had to take it all in before I went home - back to screaming children and noisy vans with loud speakers. 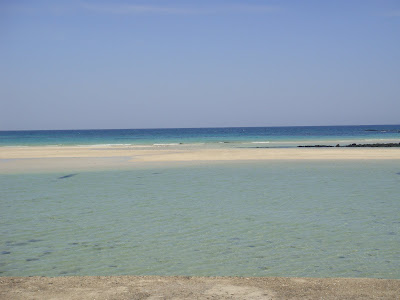 Well, I couldn't get an earlier flight, so I passed time at a coffee shop with my netbook. I was feeling very tired. What is it about the beach that makes one feel so drained after leaving? It's not like I even went for a swim or anything.

Anyways, I arrived at Gimpo Airport safe and sound. A cab driver approached me asking where I was going. When I told him, he walked me to his car. It was a black taxi and I remember my friend telling me that black taxi's are very expensive. He told me it would cost 35,000 Won to get home. I looked at him as if he was crazy. He said the other taxi's lined up were all going to Seoul so they wouldn't take me. Ha!
I made my way to the alleged "Seoul-only" taxi's lined up and a few men tried to get to the car before me - I assume they wanted to tell the driver that I was wanting to go to **** for an amount of **** Won. I politely told them to please go away and that I could talk to the driver myself.

Well, guess what? He obliged! An hour later, I was back in my apartment. I no longer had the view of the stunning blue ocean before me. Instead, I was looking onto rooftops of apartment buildings.