Wednesday, May 5 2010
Since it looked like it was going to rain, I didn't want to head out to the beach. Also, my massage was only the following day, so I decided to go to the sauna.

FYI > A Korean sauna is basically a public bathhouse. I've only ever been with my friend, Hye-jin here in my city. Since I was (fairly far) away from home, I thought I'd try it out alone. At this point, can I just add that even I'm surprised at the things I do?!

Mr Kim gave me a coupon which would give me a discount at the sauna. Looking at me over his glasses, he raised his eyebrows and asked with a half grin, "You go to sauna now?"

I replied, "No, I'm going for a walk on the beach." I didn't want to give him mental images of me at a public bathhouse, so I just lied. How would he know anyway? It wasn't too difficult to find and after I paid at the front desk, the lady gave me two towels and told me that it was on the second floor.

First, you put your shoes into a shoe locker, and then you find another locker to keep your bag and clothes in. There were only two or three ladies in the locker room, and I told myself, "I can do this!" After getting undressed - yes, naked - I walked into the actual bath area. 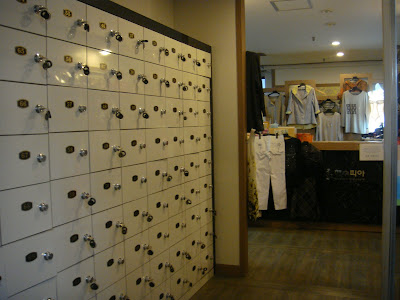 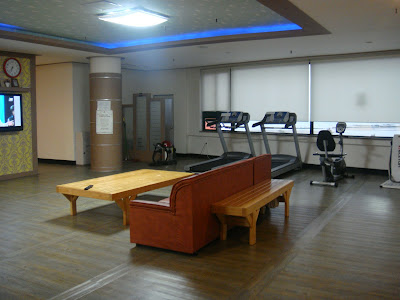 You know those recurring dreams that some people have? Where they're completely naked and everyone's staring at them? Well - that actually happened to me! The first thing one does at a sauna is take a shower. I was very aware of people's eyes on me. Even young girls were staring at me, some poking others and then pointing at me. I guess no foreigners ever go there?

I found a pool in the corner and sat there for a while before moving to a few others. As I turned my back, I saw an area where two women were scrubbing. When I asked them how much it was and if I could be next, they were very friendly and told me to wait just a moment before I could go.

One lady had short hair and was super energetic. They tried talking to me, and it just seems natural to me that I reply in Korean. To be honest, sometimes I don't want to let other Koreans know how much of the language I actually understand, because then they try to talk too much to me and I really don't understand everything they're talking about or I battle to reply. They asked where I'm from and after I said "South Africa", they immediately said "World-uh Cup-uh"

One lady asked if I was a student. I just went with it :-)

After a while, the stares from other women didn't bother me. In fact, I even smiled at some of them. About an hour after my scrub, one of the lady's came out to where I was in one of the pools and told the six ladies sitting across from me that I was from South Africa and that she loved my eyes. Just imagine this - I'm sitting in a pool completely naked opposite six (naked) Korean women staring back at me...some of them smiling. Time to move on, perhaps?!

I think I spent about three hours there before I decided to go back to the hotel. It had been raining while I was at the sauna, but the fresh air was lovely!

I spent the rest of the evening in the hotel room watching South Park (my latest obsession) on my netbook. I went to bed feeling squeaky clean and hoping that the sun would be out the following day.

im dying to go to the sauna. i know i will when im next in korea. pity i couldnt do it the last time.
cant wait to have the scrub.