Wednesday, May 5 2010
As with most of my travels, the idea to go to Jeju Island was pretty spontaneous. Since I had a few days off from work, there was no way I was going to waste it. I left on the morning of Wednesday, May 5 2010. It was Children's Day and I thought I'd hit a lot of traffic on the road. This time, I'd be departing from Gimpo Airport and instead of hassling to take a bus and subway, I thought I'd cut that entire time in half and just take a cab. It worked out pretty well, I think.

I was very early to check in and even managed to get onto an earlier flight. The last available seat on the next flight was literally right at the back of the aircraft. Last row, against the window. The reason I decided to get away was to take a break from what has become a mundane routine of daily life. Work-Gym-Home-Sleep and then back at it the following day.

I have also been very sensitive to noise - whether it's traffic, loud machinery or even children screaming. It's also still been a bit chilly here, even though it's May. So basically, all I wanted (and needed) was a few days away of warmth, peace and quiet.
Read that as: I needed an escape! 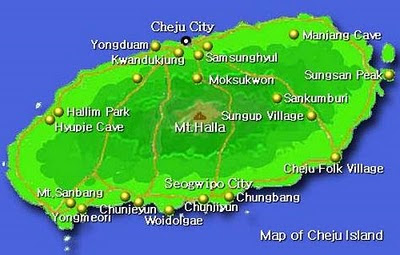 Image from Google Images
Finding a hotel was a nightmare and I made countless calls to hotels only to be told that they had "no booking" or "now is full". Apparently, there was a holiday somewhere else - China or Japan, so a bunch of foreign tourists were occupying all the hotels I wanted to stay at. I finally managed to get in at a particular one - in the city.

The night before I left, I took a chance by calling another hotel which was situated on the beachfront. They had a room! I booked it instantly.

Since I teach at an elementary school, it is only logical to assume that children are part of the majority of my day. While teaching can be one of the most rewarding jobs out there, it is also one of the toughest. Teaching children day in and day out is draining - to say the least. All I was wishing and hoping for was to have a children-less holiday. I said a silent prayer to the travel gods. Please, let there be no screaming babies. Let there be no tantrum-throwing toddlers. Please.

Well, if there's one lesson I've learned, let me share this with you: You can't avoid children. It's impossible. They're everywhere. Everywhere. Still, I was determined to have a relaxing time.