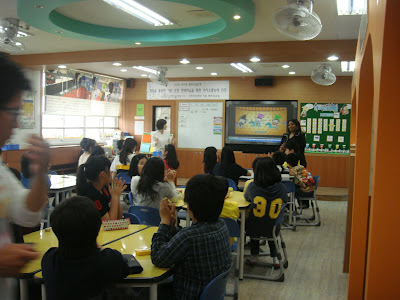 On Wednesday, May 19 2010 I had an open class which was attended by English teachers (Korean & foreign) from my city as well as folks from the Education Department.

The class we taught was 6.6 (my favourite!) and they were exceptionally well-behaved. 40 minutes seemed to fly by and when the class was over, my co-teacher and I were both complimented on a job well done.

The teachers then gathered for a meeting to discuss our class, our teaching technique and methods used. I was commended on drilling the students to repeat the key sentences of the lesson as well as using various intonations when doing so.

After the meeting, I had to give some sort of "cultural training". I gave three separate presentations:

Recently I have been shocked to learn that many people here have very little or no knowledge about South Africa. The other day, a co-worker said to me, "Actually, I don't know about South Africa. Is it near Africa?" Other things that they know about is apartheid - which was taught to them at high school. Of course, they know icons like Nelson Mandela and sporting events like the FIFA World Cup have also helped place South Africa on the global map.

I really enjoyed giving my presentations and even taught them a few South African words. There were many things that they didn't know about Indian culture, like the significance of wearing a bindi.

Speaking about my transition into Korean culture, I mentioned the four phases of cultural adjustment that people typically go through when relocating to a foreign country:

All in all, the day was a great success and the many nights of minimal sleep paid off.
at May 23, 2010

I wish I was there to hear your cultural presentation!

Maybe I'll write a blog about the things I spoke about :)