So my new friends from Singapore and I decide to lunch together. First, the driver stops at my hotel to drop off some paperwork or something. I will get off at the next hotel stop to have lunch there. My bag is feeling a bit heavy. I'm carrying my bulky camera with me as well as some things I bought during the day.  While the tour guide is talking to someone in the hotel lobby (I can see him), I ask the driver if I can please go in to leave my shopping in the room. It would take a maximum of two minutes.

I explain to him slowly that I am going to have lunch with the people he'll be dropping off at the next stop. I assure him I'll be back in two minutes flat and practically beg him, "Please don't leave without me." He doesn't say anything, just nods. As I get out the van, I tell him again, "Please don't go. Wait for me!"

I don't walk, but run to the elevator, go to the 4th floor, swipe my card to unlock the door and go into my room. I empty the shopping from my bag on to the bed. I quickly wash my hands and run out again. When I reach the hotel lobby, Mr Song calls me to the desk. From the corner of my eye, I can see the white van waiting for me. Mr Song wants to tell me about the tour the following day. I want to go to Wat Poh to see temples and the famous reclining buddha.  I tell Mr Song that the driver is waiting for me. He goes on to tell me that I CAN'T go on the tour tomorrow because it doesn't operate on New Years Day.

Now I'm irritated. If I knew that, I'd have gone to Wat Poh TODAY. It's one of the main things I HAD to take photos of before leaving Thailand. Why didn't he know this information before?

I have no idea how far Wat Poh his from the city and I'm not sure if I want to 1) spend the money on taxi fare going there and 2) going alone with the taxi.

This conversation with Mr Song lasts for about 1.5 minutes. There's nothing I can do if the tour is not operating and I have no energy to still argue with him. Besides, the driver is parked outside waiting for me along with my hungry Singaporean friends.

I thank Mr Song (JUST to be polite, because that's what I was taught to always do and say) and go outside.

I step out the clear glass doors and look left and right.

Where's the white van that was waiting for me?

There's a white van parked across the street. I walk over and look into the tinted windows. It's empty.

Where's the white van that was waiting for me?

Kabir and Sarah are in that van. We're supposed to have lunch together. My mind flashes back to when we were on the boat and chatting. Kabir said, "We must exchange phone numbers and email addresses so you call us when you visit Singapore."  We said we'd exchange details once we were back on land. We didn't.

I march back into the hotel asking Mr Song where the driver could have gone to.

"He no time. He go," says Mr Song.
"But I asked him to wait for me. I was supposed to have lunch with people in there," I say.
He's not phased. This irritates me further.

"Can you please call the driver and ask where he is?" I ask
"He no phone," he says.

Then the tour guide - a scrawny looking man wearing an orange T-shirt and who I gave 100 Baht to earlier suddenly appears. He's not phased by my story either.

Mr Song asks the tour guide for the list of passengers in the van. He writes down the hotel name and their room number. Room 598.

"You go there," says Mr Song.
I'm not in the mood for rude cheating cab drivers to take me there.
I wonder if the effort is worth it.

I'm about to kick up a fuss when a young man who works at the hotel walks by. Mr Song tells me that the young guy will take me to the area (which apparently is near to my hotel).

About two minutes later, the driver pulls into an area that is swarming with people, clothing stalls, tuk tuks and those damn scooters. He points ahead.

"I go there?" I ask.
I guess he's trying to say the hotel is up ahead. I thank him and get out the van. I look around me. I can't see anything that resembles a hotel with the name written on the paper that Mr Song gave me.

As I turn around, I look up to a building that reaches the heavens.  It's Baiyoke Sky Hotel. It's the tallest building in Bangkok. I wanted to stay there, but they were fully booked. I then tried at their sister hotel, Baiyoke Boutique Hotel. When I called them, they asked me to do the booking online. When I emailed them, I got no reply. Again - not impressed with the service in Bangkok. 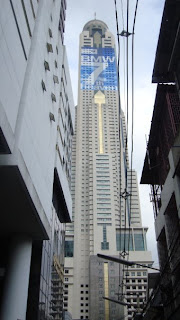 There are shoppers everywhere. I don't know which direction to walk in. All I see around me are places saying "Thai Massage" or little cafes. I remember that Sarah was dressed in all-red so I thought if I walk around, maybe - just maybe I will spot her.

I have to be very careful because scooters are zooming past me without warning. I'm about to give up. I decide to find a cafe and have lunch. When I met Kabir and Sarah, I thought my holiday was picking up. It was nice to meet them and I was looking forward to lunching with them.  Now, I was back to the same dreadful feeling I had the previous day when the cab driver cheated me. I'd never see them again, because we never got to exchanging our contact details.

In a very dramatic filmy kind of way, I'm walking feeling upset and wanting to go back to Korea. I see a slender woman with long hair tied in a low ponytail walking with a man. She's dressed in all-red. It's Sarah! Is it?

I walk to the pavement and hurry towards them. The look on their face when I reach them turns from irritation to complete surprise. Kabir has his phone in his hand and a small piece of paper in the other.  He tells me he was on the phone with the tour company trying to locate me.  They can't believe I'm standing in front of them.

Sarah tells me how they SAW me in the hotel lobby talking to Mr Song, and the driver started pulling away.


"There she is. She's coming," Sarah relates to me what she was saying to the driver.
"We were so angry with him," Kabir tells me.

To worsen the situation, the driver didn't even drop them off at their hotel. They had to walk over a bridge and Sarah tells me that she shares my fear of traffic and scooters.

I show them the paper that Mr Song gave me with their hotel name and room number.
The room number was WRONG. Why am I not surprised?

The 100 Baht I gave the scrawny man in the orange T-shirt earlier was no fee at all. Mr Song told me to give him a 100 Baht, which I did. ONLY to realize now that it was a tip. Damn!

We still can't believe that in the buzzing chaos of this area, we actually found each other again. I'm feel so irritated. So cheated. Above all, I'm relieved to have found Kabir and Sarah again. By now, we're hungry and set off to find a place to relax and have a meal together.

We need pictures of this whole thing :P

FAIZAN:
I'm sorry! In the moment of all that drama, I couldn't take pics. ...except for that one of Baiyoke Sky Hotel :-)