Bangkok (4) The drive to the hotel 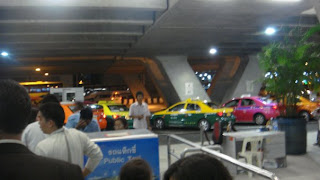 Getting a cab from Suvarnabhumi Airport is pretty easy. Colourful vehicles are lined up waiting to whisk new arrivals to their hotels. My driver was a man of small stature. I had to concentrate very hard on what he was saying because his accent wasn't very easy to understand.

"Where you come from?" he asks looking at me in the rear view mirror.
"Korea," I simply say.

"You alone? Meet friends Bangkok?" he asks.
"Alone," but then I quickly say, "...and meet friends here." I have to be cautious here!

As we drive along, we make small talk in broken English about how there's no traffic on the roads. Granted, it's around midnight. We pass an area where there are a lot of people and lights. It looks like street food stalls similar to those in Korea.

"You like disco? There good disco," he says pointing.
I can't see a disco anywhere, but I say , "Ahh OK!"

After a while, he takes a turn and I notice a 7/11 on the corner. He rolls down his window and asks some locals where P2 Boutique is. He takes another turn, and I am relieved when we arrive at the hotel. It's past midnight now, and the place is almost deserted except for a man sitting outside (working at the hotel) and a man behind the reception desk. I'm grateful I've arrived safely.