Everyone was raving about the comedy film, The Hangover saying that it was the funniest film of the year (2009). It was on circuit when I was in South Africa over my summer holiday, so my brother and I saw it together.

A few minutes into it, he leaned over and asked me, "Are we in the right movie?"

OK some scenes were funny, but we didn't think it was THAT funny...

So when everyone started raving about Avatar, I knew nothing about it, except that it was a new movie and nothing else. After its release and seeing the movie poster, I knew for sure it wasn't something I was interested in seeing.  Sci-Fi and aliens do not sit well with me at all. No, thank you! I can't even stand seeing E.T. in pictures.

I started feeling like the uncool kid, because everyone I knew saw the movie except me. People were going on about the visual effects, the storyline, seeing it in 3D and so on. It began to sound like it was a movie not to be missed, whether you like Sci-Fi or not.

I asked a few people if they wanted to see it with me. Of course, they'd seen it already. I didn't want to go alone, but if push came to shove that is what I was going to. I tried one more person, and she said yes. So on Friday, January 8 2010 after work I headed off to Siheung CGV to see what the big deal was about. 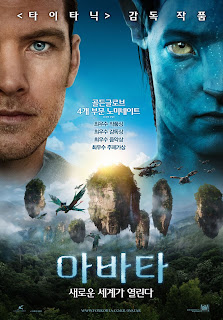 When I took my seat, I realized I had absolutely no idea what the storyline was. I was sure I was going to fall asleep. I just don't catch Sci-Fi storylines at ALL and I imagined myself going home to read reviews online to piece the puzzle together after the movie. I just wanted to be able to say "Yes, I saw Avatar". I also thought I'd be closing my eyes for most of it, because as I said before, aliens freak me out.

I won't talk about the storyline, but I will say that in the very first scene of mega-robots and effects, I was sucked in. I became so engrossed in Jake Sully and his adventures in (on?) Pandora.  I didn't know the film would run for nearly 3 hours, but I sat in my seat with my heart racing. I couldn't wait to come home and share my Avatar experience with friends online.


This is what I had to say immediately after I saw it:

I completely agree, Sheets! I was able to see it on New Years, and it was phenomenal... and I don't rave about movies too often... other movies I liked lately were Inglorious Basterds and Hangover...

Wow, that's quite a recommendation. I'll have to get out and see this movie too. First time visitor. Great blog!

Hi Sheetal,
Hangover wasn't that bad was it?
I thoroughly enjoyed it, maybe cos I could relate ;-)
Avatar is an excellent movie, we saw it on Christmas Day. I am actually thinking about going again. Pity no 3D in E.L :(
Kishor

Hello, and thanks for visiting :-)
Yes - PLEASE go and see it before it's off the circuit and let me know what you think!

I think I'll have to give THE HANGOVER another watch ;-)

Definitely see AVATAR again. I watched it for the second time in 3D. If I have the opportunity (and time) I may even see it once again - IMAX ... but things are a bit crazy at the moment, so don't think I'll make it.