About a month ago, I ordered a book for Lee. I thought I'd give it to him as a Christmas gift. After my panic attack episode which he helped me with prior to this, I saw less of him. So many people told me that I should tell him about my panic attacks. I asked him if we could talk, but it never happened.

We only began seeing each other in passing and if we shared an elevator together. Things seemed awkward between us, and I don't know why. I figured it was probably one of his many phases he was going through. He just seemed distant. The day that the book arrived, Lee pissed me off with his moods and I stuffed it (still in the bubble wrap packaging) in my bag and went home.


For weeks it was in my apartment buried under laundry, so I forgot about it.

On Christmas Eve as I was leaving work, we shared an elevator. I was going down from the 5th floor, but it stopped on the 4th when he got in. "Oh shit," I thought. We greeted each other so formally. What. The. Hell?

I spent the evening of Christmas eve with my friend, Hye-jin, her husband Hong-il and their gorgeous baby Seo-jun. I met Hong-il and Hye-jin through Lee on New Years Eve last year. Hye-Jin has become one of my closest friends since then.

Hong-il says, "I invited Lee, but he's out drinking with other friends."

"What's new?" I thought. I was a bit relieved he wasn't coming.

That Saturday I met a friend in Seoul. On the subway, I was reading The Four Agreements and started the chapter, "Don't take anything personally". 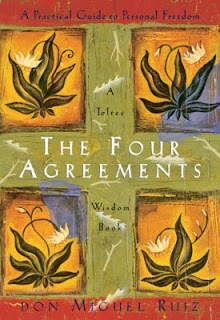 In short:  "Nothing others do is because of you. What others say and do is a projection of their own reality, their own dream. When you are immune to the opinions and actions of others, you won't be the victim of needless suffering."

I remembered the book I was meant to give Lee was still in my apartment - still in its bubble wrap packaging.

On Monday morning I had to go to the 6th grade teachers room. Lee was there. I had to ask him something work-related. He seemed fine-ish. I told him I'd give him something later (the book).  I had a busy day, but after lunch I went to his class to give him the book.

He asks about my meeting with Hye-jin and Hong-il on Christmas Eve and I tell him what a nice time we all had. I know him better than he thinks I do. He doesn't seem good - I can read his face well.

A few hours later as I'm leaving work, I pass him at the water filter machine on the 4th floor. I open the 6th grade teachers room door to say a few words to No-su (my Korean brother) and then as I'm leaving, I can see that Lee wants to tell me something. At 4:40pm, the corridor is deserted and ice cold.

"I'm independent of my parents," he says.
"You're what?" I ask as I walk over to the water filter.
"I moved out. I have my own apartment. Near LG Department Store. In Bucheon," he continues.
"LEE! Really?" I'm shocked.


He's the youngest in his family and the only child that's unmarried. For as long as I've known him, he's had to take responsibility for his ailing parents.

"It's because of my marriage," he says.
What's he saying? That he won't get married if he continues living with his parents?
"What do you mean?" I ask.
"My mother. Always asking me - 'When are you getting married?" he says.
"Wow..." I knew that he was tired of pressure from his family to get married but it must have really gotten to him to actually move out.

"Is this your first time to live alone?" I ask.

"Yes, first time in my life," he says. He tells me that's why he's filling water bottles to keep in his fridge at home.

I won't lie. For the past few weeks, he's made me so mad with his unpredictable moods, but now I understood why. And in the moment, I felt sorry for him - AGAIN.

"Let's talk more when you come back from your trip," he says. And we say good bye.

The next day as I'm sitting at my boarding gate for my flight to Bangkok, I send last minute messages to friends. I didn't see Lee before I left work. I send him a Happy New Year message. His reply:

I write back saying I hope he can experience the same one day. He replies:


"ok! anyway be careful and remember me to other spy!! bond girl ^^"

The "spy" and "bond girl" is in reference to a personal joke between us. He's "Bond" and I'm "Bond Girl".

I felt a bit relieved after sending him that message. I hate going away on a long trip (especially over New Years) and leaving things in an awkward way with people. You just never know what can happen - to either party. That's just me..

What's even more ironic is that almost the same thing happened last year when I was flying to Singapore on Christmas Eve. Things were sticky with us even THEN, but he was the last person I spoke to before I flew out of Korea. I remember feeling relieved that things were settled (even if nothing was 'wrong') before I left.

So his text messages to me seemed perfectly 'normal' and at that moment I realized that whatever is going on with HIM is all just about HIM and not ME.

Very often we take things so personally about other people's behavior or words they speak. We are so quick to assume, "It must be me!" or "What have I done?" Many times, THEIR actions or words have nothing to do with you! They're just expressing whatever it is that THEY are going through.

So as we celebrate this year year, I am going to try to consciously be less aggressive with myself and stop trying to think what is is that "I" have done. Everyone has issues that they have to deal with, sometimes on their own in their own time. I'm going to let it be.

This is a great story; I love the lesson, you wrote it out so clearly; I'm going to have to remember these words; I learned this back when I studied Buddhism in college... one reason why I just don't let things get to me, and people ask me all the time how I can remain so calm... it's such a free feeling when you can release the "ego" and change your perception of the world around you, and your relationship to this world. It's much different than "stuffing" your emotions inside of you and unleashing them when filled to the brim; in this philosophy, they are never produced to begin with =)

KENT:
Thanks for reading. Well said, and good thoughts!

Wonderful story!! Have a very happy new year ahead. I have kind of become your fan. :)

Check my blog also in your spare time.

GAURAV,
How sweet! Thank you so much - I appreciate you visiting and for your very kind comment! I will head over to your blog. Hope you have a lovely 2010 x

Hmmmm, its great getting back one of ur best pal. Now you will be more relaxed , happy n feel light. Hope now you can understand him much better. I heard the sentence "Dont think from your way, try to put your feet in that person's shoes and then see", the things will be more clear... :) Take care..

CHETAN:
Exactly right! He's been taking care of his parents who aren't very healthy for many years, and I guess that's very stressful for him. The quote you speak of is like one from "To Kill a Mocking Bird" - one of my favourite books :) As always, thank you for reading!

ANONYMOUS
Thank you for visiting :-)