The Dolls are comin' to town! 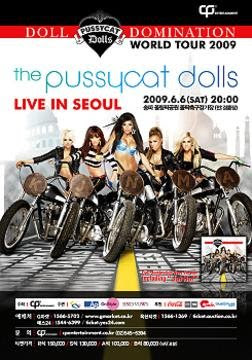 I'm not a huge fan of Pussycat Dolls, but have enjoyed some of their chart-topping hits, including the latest Jai Ho! (You are my destiny) from Slumdog Millionaire. The Dolls are currently on a world tour which began in January this year. They're heading to South Korea and are having a concert in Seoul on Saturday, June 6 2009 @ 8pm.

In November 2007 I went to the Beyonce Concert in Seoul, and in June last year I went to the Big Bang (Korean group) concert. They were both mind blowing and I'm pretty sure the Dolls won't disappoint~!
at June 02, 2009

I'm not a fan of PCD either but do enjoy some of their music. That's great you are going!

OMG!! You went to see Big Bang?? I looooove them. Okay, I love Tae Yang. You have pics? Hehe

Have you always lived in South Korea?

I LOVE LOVE LOVE Big Bang :)
At first, I was in love with T.O.P but after Taeyang came out with his solo album, my heart was all for him! I'll look for the Big Bang blog post and show you the link.

Okay, I have to search your blog now!!

Tae Yang is my latest crush! Before him, it was Taebin, haha. I like them Tae's. 1Tym is awesome.

Wow, it's so interesting! I never been outside the USA! No kidding.