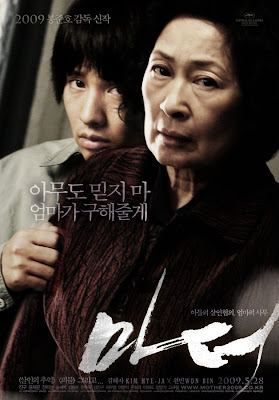 On Wednesday, June 10 2009, some of the Grade 6 teachers and I saw a Korean movie, "Mother" (마더) The film is directed by Bong Joon-ho and stars Kim Hye-ja & Won Bin in the lead roles.

A widowed mother, who runs an apothecary lives with her only son, Do-joon who is portrayed as a shy and quite young adult. Something awful happens one night in the little town they live in when a school girl is murdered. Do-joon becomes the prime suspect in the murder case, even though there is no real evidence against him. His defense attorney turns out to be incompetent, which is when the boys mother becomes involved. The movie really starts here, when she is hell-bent in proving her sons innocence.

The entire film feels cold and eerie - portrayed very well by the colours (or lack of). There are many tones of dull grey, green and brown that are used. The rain scenes were shot very well and definitely gives a sense of mystery and suspense. Little is left to the imagination especially during some violent scenes. I was squirming in my seat afraid that I was going to be faced with gory images. Ugh.

There was only one sex / nude scene was was pretty graphic considering the fairly conservative nature of Korean folk. But it was over within a few seconds.

The title of the film, "Mother" is simple yet powerful. A mother's relationship with her children is something that can only be described by someone who IS a mother. But I've always maintained that a mother's relationship with her son is slightly different than that of a daughter. This film explores this very well. There are some very intimate scenes portraying this between mother & son ~ One scene in particular is when she follows her son outside while he's urinating against a wall. She stands beside him and makes him drink something before he gets onto a bus. After he leaves, she tries covering up the urine on the pavement.

Some people may think some of the scenes are boderline awkward especially showing the mother and son sharing a bed, but it's all very innocent. The director shows the audience the extreme lengths a mother will go to for her children - as gruesome as it may seem.

The lead actors were exceptional in their roles and definitely give substance to the characters they portray. The mother first comes across as being over-protective and worrysome about her son. But after imprisoned for murder, she becomes obssessive trying to prove his innocence. The son is also very good and at times and I've been told that he (Won Bin) is well-known for being able to pull off any role.


Here's a trailer of the film

I want to see this! I freaking love Won Bin. I've been waiting to see this just for him. I love his movies and he's one of my fave Korean actors. I hope to find it, hehe