Boobs 'n all that - does size really matter? 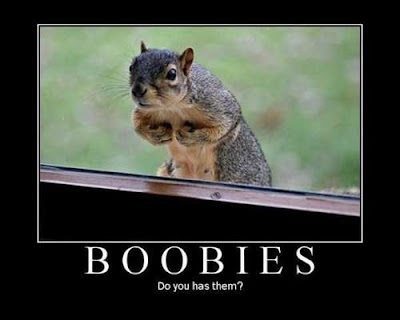 Image taken from Google Images
I met my friend Sarah for dinner after work today. We hadn't seen each other in a month 'cause I was in SA during the summer vacation. I gave her a necklace I'd bought for her - she loved it and put it on immediately. I told her it looked so good on her and the length seemed to be just right.

She looked down and made a zig zag action across her chest.
"I just wish these were bigger," she said.

I didn't see the connection between her chest and the necklace, but anyway...

My reply?
"You can have some of mine if you want?! I have more than enough to share!"

She went on to tell me about a Tyra (Banks) show she'd seen over the holiday. It was about flat-chested women who so desperately wanted 'more'. They had friends with bigger busts on the show trying to convince their friends that they were "just fine."

Apparently some of the flatter chested women were in tears (and I've seen a few Tyra shows so I can just image) and went on to say that they absolutely hate it when people think they're 16 because of their flat chests, when they're already in their 20's.

Tyra sent these women out in public and surprise surprise - ladies with more cleavage candy for the guys were drooling over them and offering to buy them drinks, whereas the those who were not so 'booby' now were simply ignored.

These men admitted that they were more attracted to ladies who offered more to put on show beneath their neckline.

As we wrapped up dinner and headed out, I said to Sarah, "I get stared at too, you know... often on the subway." - And I know they ain't staring at me 'cause I'm a foreigner. The Korean brothers (and older men) are anything but subtle about where their eyes wander to.

I'm not shy to admit that I've been gifted in 'that' department, and compared to my Korean friends, it's like I've hit the jackpot! Some of the comments I've received about my MILK BOXES (as my Korean father, Mr Lee calls them):

"Waaaa - I really envy you!"
"You so glamourous!" as they blatantly pointing to my chest.

Koreans tend to use this word, 'glamourous' rather awkwardly at times. If they like a jewelry piece I'm wearing, or they like the way my hair falls on a particular day, they tell me I'm "glamourous" One of my boy students complimented my bracelet once and said, "Teacher - elegant!"

Sarah went on to say that the guys who were on the Tyra show said that, "flat-chested women look just like dudes" Hmmmm, really now?

*Personally* I'd much rather have smaller boobs than bigger boobs. With a smaller package, you have so many more options - push up bra's, strappy tops, bikini tops etc. The lingerie stores here in Korea cater to almost every woman's need - I've seen bra's of every colour and design ... so many, that women can have a different bra for every outfit she owns.

Ladies with a heavier chest are more limited. Some won't even entertain the thought of leaving home bra-less, and how difficult is it to find tops that FIT snuggly without the buttons across your chest threatening to pop if you relax and breathe 'normally'?!

So while I know that my 'milk boxes' get some attention on the subway, and the onlookers aren't discreet about their eyes, I've stared right back at them. If my eyes could speak, they'd say "Hey fella - my face is up here"

I can definitely acknowledege that men 'appreciate' women's "assets" but their deep and curious fascination about these two amazing (I think) organs still tickles me!

LOADS more to talk about on this topic, but that's for another post.

Hmmm, from a guys eyes, you can not imagine of that tickling feeling when most of the guys look at cleavage and "milk boxes". But this feeling is totally natural. Well the question "does size really matter" is most confusing one, cos for both gender we keep asking all the time, and i think its different answer for each person. So, for me, hmmmm i think it does matter. And i really enjoyed your blog. Take care

I'm gifted like you in that department. Ironically, I'm the ONLY one in the family that is gifted. My sister and mother are both boobless.

However, I do feel that my boobies make me look a lot heavier than I am because I have a small bottom half. I will have to wear a Extra Large top and a Medium bottom so I hate finding dresses too.

A lot of my Laotion friends have gotten breast implants. It looks funny on them because they are size 0 with Double D breasts.

Also agree there are a lot more cute clothes for small-chested females.

You know, I played with my Myspace profile before. I put a picture of me and my cleavage and so many guys have requested to be my friend. When I just put a head shot with no cleavage, not many requests. Interesting, huh?

Nicely said - thank you :) Of course, it's natural and I suppose many things should be just left to men and women's imagination - right?!

And I agree, the whole question of size is a matter for both sexes - an ongoing battle for many years! Thanks for your time to read & comment.Till next time...

As always, love what you have to say. And I can definitely believe that about MySpace - even on FB, I get requests from some guys whose Friends List mostly has pics of booby chicks.

I suppose as humans, we are almost never satisfied with what we have. Blondes want to be brunette, small boobs what big boobs, dark skin want fair skin. I mean - what gives?

I honestly think that as I grown older, I'm becoming a lot more comfortable in my own skin.

Have a super day x

It's kinda like how boys like me with dead straight hair wish we had curly hair and the ones who need to use straighteners are so jealous of our weirdly straight hair.

Size really matters!!
What a mush is to a guy, bxxx are for gals. FYI: Assets could have been said as "property" and flat/bare ones as Manchester.
Asians generally are one up in this and people from the Orient are slim as a reed which others crave for. Well written and researched.
Keep it up. Cherie

We *always* want what we don't have, right? Blondes want to be brunettes, brunettes want to be blondes...people with thick hair want thin hair - the list is endless! We should be satisfied with the assets we have ;-) And if there is a chance to improve or enhance them, then I'm all for it. Thank you for visiting my blog! *

Thank you very much for reading this! Indeed, others crave for the slim figures of Asian women, but at the same time Asian women wish for bigger "property" :-)

Well i hav windows 7 and it was workin perfectly then suddenly it comes up with a threat detected saying C:/Windows/Temp/Bla bla bla/Svchost.exe. Note: ignore the Bla bla bla. its some random file i dont know and it is a temp. so anyway can anyone help me plz. I scaned my computer with AVG Virus System and it came up with trogan virus detected C:/ProgramFiles/WarcraftIII/WarcraftIII.… and FronzenThrone.exe. this pisses me off! and that has nothing to do with this. so like every few miuntes it comes up with a error sayin some threat has been detected. and everytime i try to open WarcraftIII.exe and Frozen Throne.exe it comes up with an error sayin WarcraftIII.exe Or Frozen Throne.exe Trojan virus detected. which has nothin to do with the Svchost.exe. this came up just after i started mukin around with This so called Svchost.exe file which is under system32. Can someone plz help me? Thx Guys! P.s Sorry for my bad language. [url=http://gordoarsnaui.com]santoramaa[/url]

Something free, something virus free, some thing easy to download, ease to install, I like a lot of NES music and just 8 bit music in general so I always wanred to make my own. Thanks. I think that kind of music is called MIDI, right? [url=http://gordoarsnaui.com]santoramaa[/url]