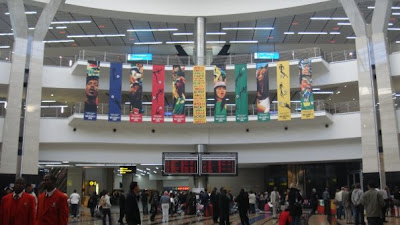 We arrived early at OR Tambo...around 06:35am. As I mentioned before, the flight felt really long. I was really impressed by the speed / service at Immigration. Construction is still underway at the airport, but hopefully it will be worth the wait :-) and in time for 2010.

After freshening up, I waited a few mins where family friend, Dilipkaka was going to meet me and walk over to Domestic Departures.

The chill in the air was biting.

Also... the girl I'd sat next to from Korea to Hong Kong passed by me while waiting for my luggage at the carousel. On the flight and in Hong Kong, we said we'd exchange numbers and meet up when we're both back in Korea. But like most empty promises, it never happened.

Oh ... I forgot to mention: One thing that really pinched my nerve. When I was walking out of customs, I greeted the staff, "Good Morning!" They asked if I had anything to declare. Obviously I didn't because I was walking through the GREEN. I said, "No, I don't"

For non-South Africans: Durban is a South African city largely populated by Indians. It grates my nerves when people assume (JUST because I'm Indian) that I'm from Durban.
at August 02, 2009

Hahaha, I agree about the sterotypes though. Funny, true