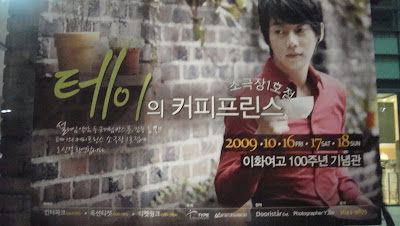 My friend Joo-hyeon has fallen in love with a Korean Ballad singer, Tei. Last night (Saturday, October 17 2009) I went with her to his concert, "Coffee Prince Show"

It was in a theater and no photos were allowed (damn!) He was *SO* good, that I think I may have fallen in love with him as well! He was so interactive with the audience. He said that he wanted the show to feel like we were sitting in a coffee shop. He even had a table with 2 chairs set up as props. Definitely going to be buying his album this week!

He had some guest performers (who Joo-hyeon tells me are famous artists). We sat on the second floor, and some of Tei's famous friends were sitting just a few feet away from us. They came in quietly during the last hour of the show and left before it was completely over. Didn't bother me though, 'cause I didn't know who they were!
at October 18, 2009