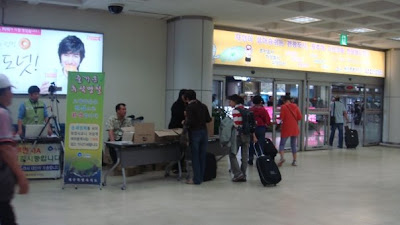 My new friend and I walked into the airport together. I only had my carry-on, but he had to collect his luggage. He said I should wait for him and he'd help me get a cab to my hotel.

Well apparently the camera picked up that "I" had a very high temperature so they needed to take my temp right there and then. Fine. He was an official and there was a special section set up for all this. *There's caution for Swine Flu EVERYWHERE*
He said my temp was higher than normal, but he let me go.

So my new friends kept to his word - put me in a cab and told the driver where to take me. And off I went to my hotel. I've always said that almost anywhere in Korea looks the same. There's a Paris Baguette (bakery), Family Mart (convenience store) etc everywhere, so I may as well be back home.

But I could definitely feel that I was on an island. How? My hair started to misbehave :(
at October 15, 2009