by Mia Snyman
JOHANNESBURG — The deafening din of the vuvuzela filled the air Wednesday, all to honor South Africa's national soccer team as it prepares to open the World Cup in two days.

About 25,000 fans flocked to the streets of Sandton, an upscale suburb of Johannesburg, to blow on their long plastic horns on what some are calling "Vuvuzela Day." 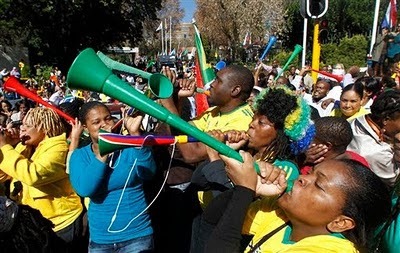 Many danced in the square in front of a massive statue of Nelson Mandela, shouting "Ayoba!" — South African slang for super or awesome — while others climbed trees and let their vuvuzelas ring out on those standing below.


"I feel like an African when I blow the vuvuzela," said Hendrik Maharala, a 26-year-old construction worker from Johannesburg who participated in the celebrations.

The festivities spread across the city, where passengers in cars hung out of windows to blow on their horns. In Sandton, fans formed a human chain and marched through the streets, blowing their vuvuzelas and carrying posters saying "United 4 Bafana."

Bafana Bafana, the national team's nickname, will play Mexico in the opening match of the World Cup on Friday at Soccer City, and "Vuvuzela Day" had South Africans of all ages and races united in support.

In Pretoria, kids were out in the streets and outside schools blowing vuvuzelas. And in Irene, as the Italian team bus drove by, kids were blowing their vuvuzelas as it passed. 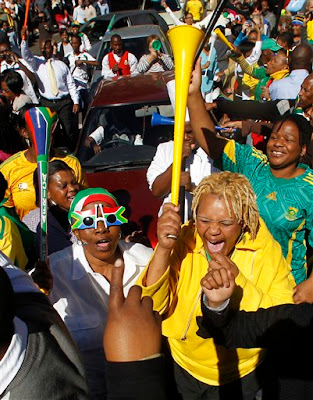 Some people call the sound marvelous, while others call it terrible, but the sound of the vuvuzela will definitely be heard throughout the World Cup.

But Hans Somsen, a Dutchman who has lived in South Africa for 15 years, said he hoped vuvuzelas would be barred from matches. 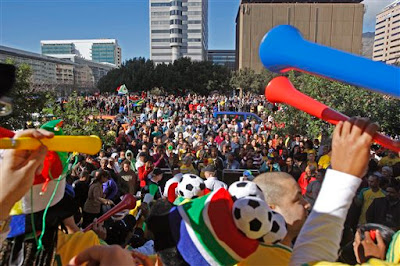 "It takes away the atmosphere," Somsen said. "It's a ridiculous thing. They must ban it."
Some players have spoken out against the plastic trumpet, with Germany defender Arne Friedrich saying he doesn't like them because they are too loud.

"I hope that as the tournament gets longer we won't be noticing them so much,' Friedrich said.

No matter what any players think, it will be the fans who decide how loud it will be in the stadiums, and some of them are already planning a supersonic noise level.
"I like the vuvuzela," said Colinne Sammons, a local housewife. "I want to buy one."

AP Sports Writers Nesha Starcevic and Karl Ritter in Johannesburg and Ronald Blum in Pretoria contributed to this story.