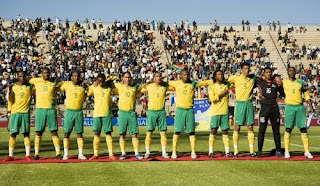 Ok, granted I don't usually follow soccer, but the FIFA 2010 World Cup is extra special as the host country is South Africa.

For the past three years, I've lived in South Korea and my love and patriotism for my country has definitely increased over the years.

Since last week Thursday, June 10 when I (virtually) attended the Kick Off Concert, I have pulled all-nighters - gone to work, meetings and tried to maintain a somewhat balanced lifestyle as I straddled two timezones (South Africa and South Korea).

On Friday night when I watched the kick off match with hundreds...thousands of fans across the world (online), my heart skipped a beat when Bafana Bafana scored a goal in the first match of the 2010 World Cup - on African soil.

Cameras panned over the colourful crowds cheering, dancing, singing, hugging each other as they waved their flags high with pride. I remember tweeting LADUUUMA! (pronounced la-doo-mah... it's a popular South African cheer to celebrate goals at soccer matches) I also sent texts to my parents and brother in South Africa expressing my joy. The electric energy flowing from the bottom of the African continent was contagious, regardless of timezones.

The online community was buzzing, especially of tweets with labels #BafanaBafana. For my non-South African readers, Bafana Bafana means "the boys the boys".  People talked about the team as their own children. "Come on, boys....you can do it" It was quite endearing. When Siphiwe Tshabalala scored a goal in the first match against Mexico on Friday, June 11, South Africans were all praises for him. I felt super proud to be part of a nation coming together like that. 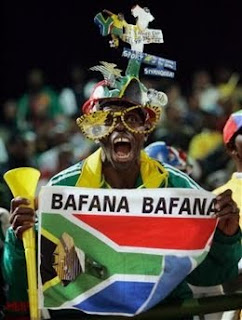 On Wednesday, June 16 (Youth Day in South Africa) I went to bed at 10pm - probably the earliest I've slept all week, just so that I could wake up in time to catch the South Africa vs Uruguay match.

At 03:30, the game started and I had butterflies in my stomach as I watched and half chatted to friends across the world - from South Africa to Germany to Switzerland.

When I heard the Korean commentators shout GOAL! My eyes darted to the TV...who? Who? WHO?

My heart beat a little faster and I didn't know what to expect. Friends told me, "It's still early in the game, don't give up."

An hour and a half later, the final score was Uruguay 3 South Africa 0.

There were shots on TV of people leaving the stadium before the match was over. People were looking disgraced, sad and angry.

Why were they leaving the stadium?

To me, that was an embarrassment. All eyes are currently on South Africa. People are judging us in every aspect and being the host nation, what do you think they're thinking of people leaving when the game was not even over? It's a disgrace.

And then the online community started their rage. Some said they wanted to cry. I was one of them. I really felt sad. I was surprised at my own feelings, but this is the power of solidarity across the ocean and continents.

Getting ready for work on Thursday morning, I got to thinking about all the comments I read online.

The only comment I know I said was that I felt like crying, but I never hammered the team or its players on their performance.

Granted, only loyal soccer fans will understand how fair the games are or how well the players played, but this is what I maintain:

Parents support their children in sports (and other things) no matter what. Even if they know their little boy or girl is slower than others or not that good, they sit on the sidelines and cheer. When they don't make it, do you see mothers/fathers driving away angry that they children played badly? Do they simply not speak to them?

No! They continue to support their children and encourage them to better themselves next time.

Many South Africans have declared that they will still be die-hard Bafana Bafana supporters, but I was really disappointed to see that others have failed miserably to support their nations team.
at June 19, 2010