I just came across this article from Daily Dispatch. 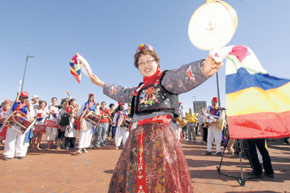 Pic from The Herald
FORGET about the sound of the vuvuzela – the Korean drum has proven to be a force to be reckoned with.

This, after more than 20000 people went through the gates of the host city fan park at St Georges , to witness Bafana Bafana’s enthralling 1-1 draw with Mexico on Friday afternoon.

The stadium itself was a sight to behold with the drum-beating Korean supporters – nicknamed the Red Devils – proving they would be more than a match for South Africa’s vuvuzela-blowing faithful.


The 3000-odd Korean fans vastly outnumbered their Greek counterparts and spurred their team to the 2-0 victory on the back of some vigorous drum-beating.

Explaining that “drums were part and parcel of Korean football”, team liaison officer Jang Wook Park said the players and fans thoroughly “enjoyed being in PE … the hospitality was excellent”.

But he did feel the distance from Johannesburg cost the team more fans: “It’s quite far … we expect about 5000 fans for the Johannesburg match.”

The Fifa Fan Fests were an enormous success story in Germany in 2006, as they act as an alternative for fans who are unable to get tickets to the stadiums.

They also offer fans around the globe the opportunity to watch all games in a stadium-like atmosphere. T he Port Elizabeth fan park also boasts the largest television screen in the country.

Some of South Africa’s biggest entertainment acts are expected to converge on the city, with the likes of Danny K, Malaika and Skwatta Camp lined up to entertain fans over the next few weeks.

With no alcohol permitted into the stadiums, imbibers got quite a shock when asked to fork out R30 for a pint of an American beer , the only brand on offer.