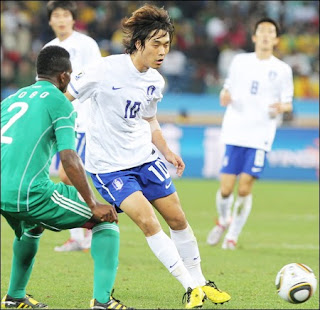 Right after the South Korean football team secured their ticket to the round of 16 at the South African World Cup, the chief of the football organization said he plans to propose the government to revive the exemption of the players from military duty.

Cho Chung-yun, chief of the Korea Football Association, said, "What the players want is to be exempted from their military duties."

His remark is causing a fresh round of disputes on the Internet.

In Korea, all able-bodied men over 20 are required to serve in the military for about two years under the country's conscription system. Olympic medalists and gold medalists from the Asian Games have been exempted from the national service.


Back in 2002 when Korea and Japan co-hosted World Cup games, Korea advanced to the second round.

With the festive victorious mood, Seoul revised the law to relieve national footballers from military duty if their team reached the second round of the World Cup.

Thanks to the amended rules, the national team including Park Ji-sung, were exempt from military service. Following the precedent, the government also passed a waiver to baseball players who advanced to the final four in the World Baseball Classic (WBC) in 2006.

However, the revised rule was reversed in 2007 due to negative public sentiment. Hence, baseball players participating in the WBC last year were not exempt from the duty, although they reached the final.

Those who agree with the special benefit say the players will be able to extend their career prospects and further contribute to the country in the future. However, opponents claim that military service is a sacred duty that no man should be exempt from due to a one-time athletic performance.

"I don't think it is right to give a waiver to players only in popular sporting events such as baseball and soccer. It is very unfair for players in other not so popular sports," said an Internet user, with the ID 'nij.'
at June 24, 2010