Published a few days ago in Korea Times. 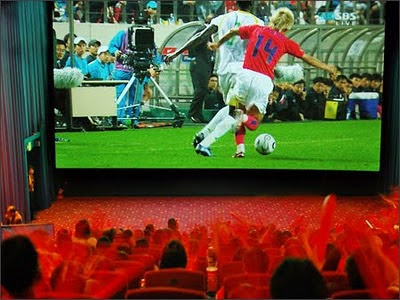 Local theaters including CGV and Lotte Cinema will screen 2010 South Africa World Cup games in 3D at select theaters around the country between June 12 and 23.

The 2010 FIFA World Cup team members representing South Korea have been announced and Red Devil T-shirts are selling fast in stores. Instead of scrambling for a spot in Seoul Plaza to tune into the world's most watched sporting event, why not head to a movie theater, where you don't have to worry about people stomping on your shoes?

Major theater chains around the country will screen live broadcasts of games, that offer not just air conditioning and state-of-the-art sound systems but also, in tune with the times, 3D vision.

Local football fans unable to travel to South Africa will be particularly pleased to enjoy the matches in the third dimension.

During the 2006 Germany games, red T-shirt-clad fans headed to CGV theaters to catch every kick on the big screen, and this year the theater will offer an upgraded experience. Forty-three of its theaters will show games on over 35 3D screens and over 100 2D screens.

``We plan to screen various sporting events in the future, as well as other alternative content such as plays and musicals. By featuring classic sports games and theatrical performances, the movie theater will evolve into a more diverse cultural space to cater to today's audience,'' said a representative of Lotte Cinema in a press release.