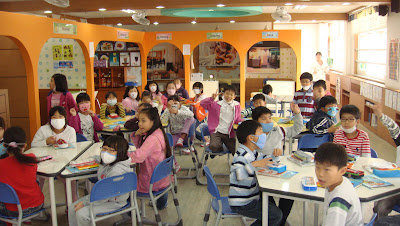 I've been running on minimal sleep for the past few days. On one night, I was woken by a buzzing mosquito whose sole purpose was to wake me up from a deep sleep and feast on my flesh. The other nights, I needed to stay up to keep writing. Like nearly every other writer, I have a day job (9-5) and can only settle down to write at around 7:30 in the evening (after I've been to the gym)

I'm an English teacher at an elementary school in Korea and I really need a good nights sleep to be at the top of my game. I teach 33 classes a week (phew!) By now, I've come to know the personality and ambiance of each class I teach. I know who's energetic, noisy, quiet, responsive etc. Yesterday morning (Friday) my first class of the day was a 4th grade class. They are fairly quiet and like most children, they are still waking up at 9am.

Teacher's are also human and sometimes we also feel like we're just waking up at 9am. In my case, since I'm an early riser, at 9am I'd have been awake for four hours already.

Just like each class has its own personality traits, all teacher's are different too. Some are very active who bounce around the class keeping children alert and on their toes. Other teachers stay at the front of the class and do what has to be done and only commute from the board to their desk.

I believe I'm the former of the two. If I see that my class isn't responding to a lesson, I'll stop in the middle of it to get them singing or moving around. This will have them giggling and hopefully be more interested in what I have to say. I've often said that I'm more of an entertainer than an English teacher, but when working with children - you simply have to be. I have to turn into a "happy-clappy-singy-dancy-person" which I'm not sure if I am in real life :-)


I also don't like standing at the front of the classroom for the whole lesson unless I have to write on the board or use the computer. Other times, I'm walking around the room. This keeps the children alert because some of them will turn to face where ever I'm standing and pay attention to my instructions. I have a rule: I will only say things twice. If they don't listen, they will miss out on an important instruction or test question. The others (especially those who sit at the back of the class and think they can get away with reading comics or talking to their friends while I'm talking) know they can't do that if I'm standing near them!

Of course, I'm not perfect. I also have days where I'm feeling tired or irritated. And it's not always easy to wear a "poker face" so I find it very hard to speak with as much enthusiasm and animation on those days.

My current co-teacher is temporary while my usual co-worker is on study leave at the moment. Yesterday we started a new chapter with the Grade 4's titled, Sorry I can't where they will learn how to accept or decline an invitation as well as giving a reason for it. 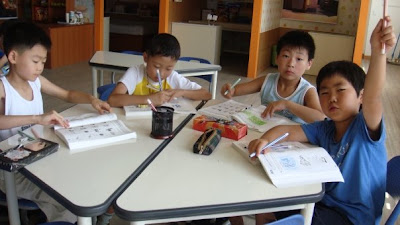 My co-teacher (who I'll refer to as CT) and I both greeted the class, and I went on to my 10 minutes of Phonics. I use Starfall, a very useful Phonics site with great stories that the kids enjoy. CT then introduced the new lesson (speaking in Korean) telling them the objectives of the chapter and what they will study. We then use the prescribed CD & textbook. They listen to a dialogue and I quiz them on it after. This also forces them to pay attention to details. I ask questions like, "What colour was her hair?" or "What did Minsu say to Julie?"

After 20 minutes of my teaching them, it was CT's turn to do an activity with them using a website. They were going to learn new vocabulary and also take a fun quiz. After I was done with my part, I started floating around the class as CT taught the rest of the lesson.

I don't mean this to be a personal attack on her at all, but I merely want to demonstrate a point which I'm sure any educator would agree with. Within 5 minutes of CT starting her part of the lesson, the class became restless and talkative. She was sitting slouched at the desk looking very tired and speaking in a monotone with zero enthusiasm. Also, she didn't try quietening the class down. I asked her if it was OK that I stepped in and taught the section with her.

I went to the front of the class and had them repeat sentences after me using actions and different tones. And did they respond? Yes! After that, I had them sing a song and since we had a few minutes to spare, we played Hangman (word game). They were literally sitting at the edge of their seats as we played the game. When the bell rang we had to dismiss them to go back to their homeroom.

The manner in which a teacher dismisses a class is just as important as greeting them. My students know that they can't line up to leave unless their chairs have been pushed in neatly under their desks. I have them say 3 things before leaving:

Children are sensitive and can feel the energy (or lack of) from their teacher's. The responsibility therefore lies with the teacher to inject them with enthusiasm for learning. If he/she is lethargic when teaching, how can they expect enthusiasm from their class?
at November 14, 2009

well sheetal may be i think u are actually missing to settle down, sorry if i am rude , but you see i write a lot as well and talk to a lot of people as well, im sorry if im rude , but hey thats just my opinion to hell with my opinion,...
if you like ur life, as it is u go girl....
u knw u remind me of rusell peters i meam ur kind a cool u knw but some times u can be fucking rude but thats okay... thats how it should be, any ways listen to some cool songs from christian bautista, he is filipino singer, and yes who wouldnt like to see you naked, i mean ur kina hot i look at those hips, i mean no offence but those are some lovely asian hips, only and true indian girl can flaunt, so be proud as u are and stay as u are.....

Hi Anonymous, hope you are well. I think you are rude and do believe you are a liar, you claim you write a lot? My friend, replying your mothers text messages does not count as writing a lot. Do yourself a favour and hit that little "grammar check" button.

I see you mentioned Russel Peters, the only way you could mistake him for being rude is if you are a fucking idiot, which you have proven more than once in your lame ass comment.

Last thing, go over to www.youporn.com and get your wank on over there, we don't need to hear about about your little asian flaunting hips fantasy over here.

So remember, before you hit comment go play with yourself :)

hey bad boy go fuck ur self okay and i was not educated in some lame shit bad ass school like u and fuck u , u ..well i hope i fucking get a chance to meet u u .. any ways fuck ur self and u fucking go back to where evr lame shit school u went to

i hope sheetal u dont get upset over this, i am just getting back at the one named bad boy---- any ways the message is for you the one who replied back to my comments bad boys... fuck u u mother fucker, u cock sucker, u duck fucker, u frog fucker, u go any get ur fantatises fulllifiled i sewear if i ever meet u i would like to ... i will do it and show u as actions speak louder then words, go fuck ur self bad boys(tagged writer)

once again this message is for badboys... fuck u,

hey sheetal i was just saying if u want t enjoy life enjoy it to the fullest but,dont get too carried away by it any ways i hope i get a chance to meet this badboys tagged commenter is he a freind of urs, i hope not if he is one more time to that duck fucker go fuck urself

Hey Anonymous, I can sum you up in one word "WANKER"

Now try be a bit professional as this blog does receive hits from all over the world. If not, learn a few new words.

First off, thank you for visiting my blog, but I ask that you please comment on the relevant posts. Your comments on my 'settling down' and other topics have no relevance whatsoever to this post about teaching.

You say that I'm "fucking rude" - In what way? Also, you've clearly misunderstood my post about "writing naked" and if you were a writer, I'm sure you would have caught on to my underlying message.

Yes, this blog does get hits from all over the world!

And you still manage to take lots of pics and blog? Wow!

@ Nicki - Yes! I'm a teacher, but also a writer and have Journ background, so it's kinda in my blood now! xo