My new lil' friend at gym

After a day of just sitting glued to my desk at work, I was looking forward to a good workout at gym. When I walked in, I saw a guy who looked familiar. As I approached him, he broke out into a big smile and waved at me. It was Seo-gyun, one of my first students I taught when I arrived here. Now he's in middle school.

I start on the treadmill and after 20 minutes, Seo-gyun appears at the treadmill on my left. He wants to talk. So I take out my earphones and talk to him. I'm so impressed with his spoken English. He was always one of those students who got almost every answer wrong, but never gave up. He's one of the few that have stuck in my mind. He was also teased a lot by his classmates as he was on the chubby side.

"You house where?" He puts his fingertips together to make like a roof.
I point in the direction of my apartment.
"My house hospital" and he points in the other direction.
(My apartment is near the hospital)

"You time here what?" He points at me, then to the floor and then to his wrist.
(What time do you come here?)
"Everyday is different, Seo-gyun" 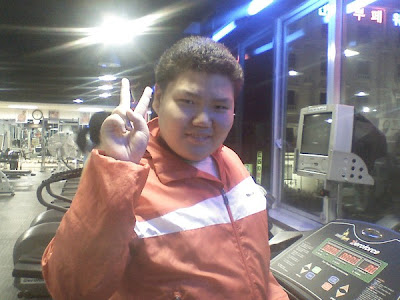 My time is up on the treadmill. Seo-gyun follows me to my next stop. I'm there for 2 minutes before moving on, and I notice he's behind me again.

I then move into the dance studio where I'm going to do some stretching and hula hooping. Seo-gyun is on my tail. He picks up 2 weights and then stands next to me to talk some more. I have to tell him to watch out so that I don't hit him with the mother of the hula hoop doing its rounds on me. He starts telling me a story in Korean. The only words I understand are "grandfather" and "bus" (in Korean), but I try to look interested and nod my head.

This guy is so cute! I can't bust his bubble and ignore him!

A few minutes later, he asks if he can use my phone to call his mother at home. Sure. He walks a few steps away, but I can hear him tell his mother that he's met me at the gym. He's speaking fast and smiling. He calls me over to the window and points outside.

I carry on hula hooping and Seo-gyun sits on the floor watching me.
"Seo-gyun.." and I make action to exercise.
"Tired!"

By now, I can see that we've attracted the attention of a few people at the gym (remember - I'm a foreigner here so I stick out like a sore thumb!)

I want to do some weights. Seo-gyun follows me out and watches me. I tell him to try it out. The gym instructor comes over and helps him.

I move somewhere else and he's behind me again. I'm on my phone sending a text.
"Friend..mun-ja? [text]"
(Are you sending a text to your friend?)
"Yes!"

"Seo-gyun, I'm going home now! He rushes behind me and the gym instructor asks him why is he leaving so soon. He notices the huge smile on my face and he catches on that this boy is following me!

He asks Seo-gyun in Korean, "Do you like her?"
He tells him that I was his teacher.

Downstairs after saying bye, he asks me again what time I'll be at gym tomorrow.

I shrug my shoulders and tell him I don't know. I leave smiling from ear to ear. It's like he's so excited he's made a friend at gym! But the thing is, he's not exercising. He's just standing watching me!

Oh, and he was so impressed that I remembered his name after 2 whole years. So cute, huh?! 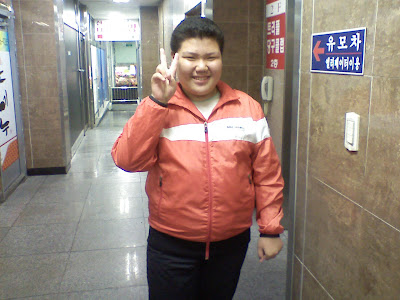 Um... cute? Is this kind of teacher-hero-worship a normal thing in Korea? And isn't it a little strange that he was at the gym but didn't take any exercise?

Or am I applying old-fashioned European suspicion to my reading of the situation?

Cute and i can see his face that he is exited to see you in gym. If its carry on like this, i sure he wont make any difference on his body, cos he will keep following you like this...lol.. but you will learn more Korean. Some times you get little less exited when your students meet you in public place, for a first time it nice to see those cute ones, but if its more then sometimes annoying too...am i right? I guess you wasn't feeling nice when you exercise and he look at you, feel ltl awkward... Take care...

@ Ken : Believe it or not, this is nothing compared to what I've experienced before here! HOWEVER - if he does continue to just follow me and not exercise, I will ask the gym instructor to help him out and be with him. It's creepy having someone watch you exercise! But he's just a kid. I hear where you're coming from though! I'll post an update on my new 'stalker' haha!

@ Chetan : Yeah, sometimes it's really not cool seeing my students out (like at GYM). I have to always keep in mind that hundreds of parents know me in this area, and I know just a handful of them. So I always have to be on my best behaviour, you know?! Foreigners stick out here..!

hahaha, I agree, he's a kid, so it's cute. If it was an adult, it would be a stalker issue...unless you think the guy is hot, then it would be flattering, hehehe.

Had to mention the peace sign posing, so typical Asian, lol

Hmmmm Thoughts diverted to a hot guy following me around and sitting on the floor watching me. Bit creepy, I think ;) But flattering?!