Saying "I'll pay" is like a sickness I have 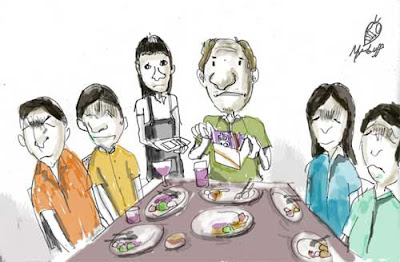 Image taken from Google Images
According to this site, Going Dutch can be defined as:

Going Dutch is a slang term indicating that each person participating in a shared activity pays for himself or herself, rather than any one person.

This concept is not practiced in Korea and people often talk of "treating" each other. It is generally accepted that if Person A pays for a meal, Person B will pay for the next meal.

Alternatively, if people head to a bar after dinner, the next person may pick up the tab there. I have a few friends here who have a good understanding of this unspoken rule. I went out for dinner on Tuesday evening with my friend, Sarah. As we were heading out to pay, she said, "I'll treat you - it's my pay day today." Our next stop was a coffee shop, and I paid there.

This is basic reciprocation, not so?

Reciprocation can be defined as:

Return in the same manner something that was done or given.

Reciprocation is a big deal here in Korea. And I've been a doing this for as long as I can remember. My parents and brother do this too so I attribute it to my upbringing. It almost bothers me if someone does something for me or gives me something until I return the favour / gesture. Even if it's just buying them a small cake to say "Thank you". But not everyone thinks this way...

Last night I met a friend for dinner. Let's call her G. I haven't seen her in months because she's been in India. I've recovered from my irritation of her about a situation a few months ago.

I asked G to go to the Pussycat Dolls concert with me. First she said she'd go but then said she couldn't because she didn't have money. I offered to buy a ticket for her [Don't ask me why. And they weren't cheap]. She accepted with delight, of course. I asked her to meet at a particular time so we could head to Seoul for the concert. We had to get there early to collect the tickets. I ended up waiting an hour for her and eventually called her to say I have to leave and be on my way without her. As a result, another friend scored the extra ticket [And no, he didn't pay for it, either]. G apologized for not making it in time - Well, what else could she do or say? She promised she'd "treat me to a meal next time"

So G has been in India for the past few months and she called desperately wanting to me last night because she's headed back to India this morning. We agreed to meet at Pizza Hut. After two hours of catching up, it was time to leave. And honestly I think it's by default that I said:

"I'll pay"
I think this was careless on my part, because when I went to pay the bill, it was much more than I expected. I don't know why I didn't look at the bill before blurting out those words. (Even though Going Dutch in Korea isn't common, it is quite acceptable amongst friends who are the same age. I've gone Dutch a couple of times with my Korean friends.) If I go out with someone and they offer to pay, I will always ask if I can please contribute something. And if they decline I thank them and it is accepted that I will pay the next time. To me, this is basic manners.

Well, G didn't put up an argument about me paying. And there won't be a next time (not in Korea anyway) as she's headed back to India. Don't get me wrong: I don't do things to expect anything in return, but this issue about paying for others - CONSTANTLY - has been gnawing a hole in my brain for months. 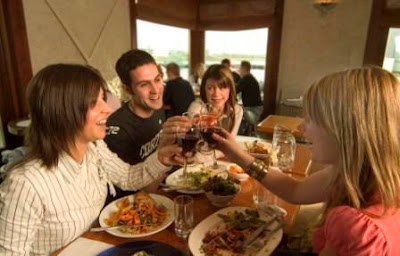 Like I said before, it's like default that I just offer to pay for people when I go out... even if I've been invited out! It's almost like a sickness I have. I can't control what I say. Another thing I find I do is that if I go shopping and someone is with me (although I much prefer shopping alone) if I'm stopping at the bakery or need to pick up milk or juice or anything from a store before heading home, I seem to ask - "Would you like anything?"

Why do I do this?

This has been going on since my university days. I was very fortunate to have parents who gave me enough spending money. I was never short of cash, and the "going out" I did was to coffee shops, movies or an occasional dinner. I had some friends who never declined an invitation to go out, but they never had money. The more I offered to pay for them, it was as if it was just an accepted thing. It was like I was a mother who adopted my friends.

I never gave it much thought. After all, what's a cup of coffee or a glass of juice going to cost? But... add it all up over time and well, if I didn't open my big mouth, I'd have saved a hell of a lot of money. And thinking of it now, it's really tiring being the one who always puts my hand in my pocket.

Even if you know the other person will pay, don't you think it's just courteous to at least offer a bit? Or even pretend like you're reaching for your purse?

People who eat to their hearts content and sit pretty when the bill arrives makes every single hair on my body stand up. This is one of my top pet peeves ever. Those who don't even make an effort to say, "Let me pay a bit" are rude. And rude people... well, I don' t want to use expletives on here, but I think you catch what I'm saying.

I'm not saying there's anything wrong with paying for friends, but I do have a very big problem when it's done ALL the time and people just expect it of you and never offer to pay.

I know there are people who can relate to what I'm saying. Or, are you one of the people I'm talking about?

Think about it the next time you're out with a friend / friends.

Sheetal, that really sucks. You should just learn not to say you'll pay for stuff or else people will carry on with their behaviour of letting YOU pay. You should put an end to it.

Deepa: I know!! I keep thinking I've learned my lesson, but clearly not. However, this was the final straw. NO MORE! Thanks for reading :-)

Need Cash Advance Fast Payday Loans up to $1500 Most of us run out of money at. But with the help of an American cash advance you can get through those. It must also contain information on embalming cash advance items and are. Business Profile and Photos of ALLIED CASH ADVANCE - Payday Loans in GLENDALE. [url=http://viiumft.rahuketu.net/map.html]credit card cash advance[/url] In roughly 5 months Advance America Cash Advance has returned 24. 1000 advance payday cash advance in new jersey personal loans from the uk check.