Language & Power in a Foreign Country

How language makes me feel
powerful & powerless in a foreign country
I've been thinking about what it means to have power. What about being powerless? Is it possible to feel both of these at the same time?

Many of my Korean colleagues and friends tell me, "I envy you"
"Why?"
"Because you can speak English and you can go anywhere [in the world]"

One friend even went as far as saying that he wishes he was never born Korean. He has dreams of living abroad, but the only thing standing in his way is that he isn't fluent in English (according to him).

I never realized how we all take English for granted. Everyday expressions that I don't even think twice about can be difficult for a non-English speaking person to comprehend. An example: "Let's catch a movie tonight" would have to be expressed as "How about seeing a movie together tonight?"

Then I think if we're talking about the issue of language being a power tool, surely being a foreigner in this country who is not fluent in Korean makes me weak (or powerless) in this society? 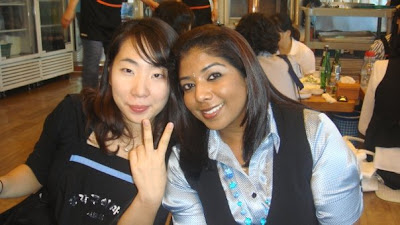 Language is a powerful tool for communication.
During my first few days in Korea I felt like I was in a foreign film where I couldn't understand any dialogue around me. On my first night, I was in tears in a PC Bang (Internet Cafe) because no one could understand me saying, " I want to download Skype" and was further stressed out when I couldn't find a phone card to call my parents in South Africa...and as a result, getting lost in a deserted marketplace at 1:30am! I thought I'd never survive here. What the hell was I thinking? Who did I think I was to take on such a challenge of moving to a country worlds apart from everything I'm used to?

Two and a half years later, I can read and write Korean and can understand enough to go anywhere on my own. I use cabs, go to the bank, go shopping and have even traveled around on my own!

If and when I'm the only English-speaking person in the company of my Korean friends, some will hang on to every word that comes out of my mouth. Some ask me about things that I actually don't know and can't answer. In that case, I'm not afraid to say, "I don't know" even if English is my first language. If I really wanted to, I could make up any garble and give them any definition of a word they ask me about. Perhaps they'll believe me and will always remember that word as the one I 'taught' them - never knowing that I just sucked it out of my thumb. (I've never and will never do this!)

Is this power that I have? It is to a certain extent. 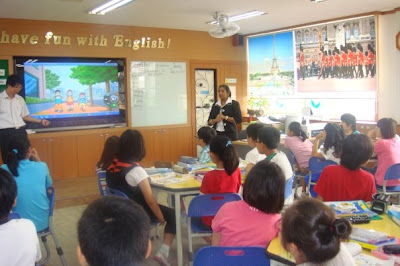 What does it mean to be a teacher?
I teach English at an elementary school to about 1000 children a week. When I stand in front of a class of 36 children, I have power don't I? I can give tests, reprimand and scold as I please. Not so? If I ask them to stop talking, they'll stop (not always!). If I ask them to look at the board or TV, their eyes will be focused on what I'm showing them (also, not always!)

The fact is that when I stand in front of 36 little boys and girls, I have authority as their teacher. That gives me power. During my 40 minute lessons I teach to the best of my ability, not knowing what each little body will take away when they leave my class. Will they learn that the "magic e" you add to a flat a-sounding word like "mat" will change it to "mate"? Or will they have learned that when you hit your hands together many times, it's called "clapping"?

I don't know. I just have to have faith that they will take at least one thing away from my lesson.

Then the bell rings at 12:10 and it's lunch time. I go downstairs to have lunch with other non-homeroom teachers as well as the school principal and vice principal. When I'm in the teacher's room on the second floor, my power is left behind in the English classroom upstairs on the fifth floor. There is a very distinct hierarchy system practised in Korea. I won't take food before teachers senior than me, and they won't take food before the principal and vice principal. Some are not as stringent about this, and just yesterday my school principal insisted that I go in front of her at lunch time.

When I think of language and the power I have as an English teacher here, I also can't help but think of how powerless I've felt for the past 2.5 years. If I'm sitting at a table with 9 other Korean teachers who are throwing their heads back and shrieking with laughter, I sit with almost a forced smile trying to imagine what could be so funny. If I knew what was tickling them, I'd be able to join in the laughter. But I can't. Because of the language barrier. 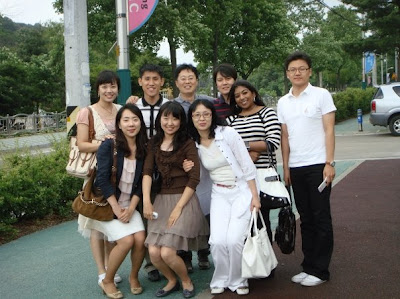 Going out to a restaurant isn't always easy for me being a non-meat eater. When I'm out at a staff dinner or with friends, we usually end up at a place that serves mostly meat dishes. My friends are considerate and will always ask for rice & a vegetarian dish for me, like a tofu stew. I appreciate this, but then when I think about it, I have little or no choice about what I can eat. I feel powerless. Sometimes on staff trips, I don't know where we're going, how long the journey will be or what time we're returning home. It's either too confusing for my colleagues to explain it to me, or I just decide to "go with the flow". This isn't always easy for someone who is used to being in control.

I teach an after school class comprised of 6 students on a Tuesday and Thursday afternoon. There are times I have to pass messages to parents about various admin issues. My co-teacher usually helps me with this - making a call or translating a letter for me. Yesterday, I asked her to call 3 parents on my behalf. She wasn't too keen on it, and I said to her - "I'm sorry to ask you this. If I could I would, but I can't." Again, I felt powerless.

And then there are other times I need to buy things (gadgets, books online) and all this has to be done by a Korean colleague or friend. Of course, I get to choose whatever it is that I want, but I'm not used to asking people to do things for me.

I thought of this today when I stood in front of a 3rd grade class who were behaving in a raucous manner. Without saying anything, they saw that I was waiting for them for settle down (with a very stern face) and they were quiet. That's the power of someone older than you and someone in authority. A few hours later when I was with other teachers, I felt powerless again.

Language (English) definitely gives me a sense of power here in Korea. People respect me as an English teacher, but at the same time ... it doesn't help in other social situations, when I feel completely powerless.

Hi there, I know this comment has nothing to do with the cute student but I just want to share with you a few tips that have helped me with panic attacks, I know exactly how you feel and know what you going through, been there, but I am glad to say it's been over 3 years now and I haven't had any, I am not sure if you are open to trying alternative methods instead of medicine, I quit taking pills, when i realized and understood what these attacks are all about. try sun meditation, just fow 2-5 minutes a day, close your close and face the sun ,try an affirmation, like, I am hope, I am free, I am alive, any word that you feel you are lacking in your life. This really works, I have started out that way, even listening to the gayatri mantra, while you sit in the sun. you are just feeling energy. medical science will see it as a problem. I wouldn't look back, I meditate religiously and I must also add, try to google Kundalini and read up about it, maybe it will make a bit sense. just thought I would tell you what worked for me.

You are right about the power and powerless points of a language, especially English. Many native English speakers do take it for granted. I was brought up speaking English and Hmong in my parents' home. As I got older, I mainly just spoke English. My Hmong is rusty. I can still speak Hmong, read/write fine. However, when I speak to an elder Hmong person, I don't know how to respond back because it's like I'm speaking ebonics Hmong, lol

Thank you so much for visiting my blog. Also, thank you sharing your story with me. I appreciate the advice. I wish more people like you would come forward and talk about it, but as I have mentioned - there's still a stigma attached to this condition. Wish I knew your name so I could thank you personally, but nevertheless... thank you :)

You are lucky that you can still read/write & speak Hmong. Are your children familiar with it?

It was like when i am with family and i can speak anything about anyone infront of them in Gujarati, they wont have any clue about it. I feel powerfull, but when someone speak xhosa or fluent/fast Afrikaans.. i feel powerless, feel like i m standing infront of alien or may be i m alien. Cant get anything from their talk...feel powerless... in shop when i suspect anyone and tell my betterhalf that its CHOR, they are clueless about what is going on, but our eyes get more sparkles and active, feel powerful. :) Always happen when we are in foreign country...I never experience this when i was growing up in india, always know what other person is talking about, even he/she speak hindi / gujarati / punjabi / marathi....we understand.. Now have to trying hard to learn Afrikaans and xhosa... feeling power in me...:)