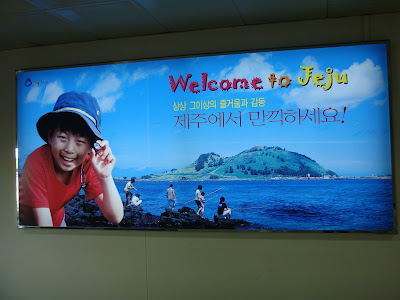 Planning the trip to Jeju Island was somewhat of a nightmare. If it wasn't flight bookings that were getting messed up, it was hotel reservations. On Thursday afternoon we left Seoul for some sun, sand and beach! Darmesh had still not tried out Korea food, so my priority was to have him fed!
We found this cool bi-bim-bap restaurant where we had lunch...and then as is tradition when I go to Jeju, it rained! We managed to get a cab and made our way to the hotel. We took a walk on the beach, and by the way - I made it very clear to everyone who we met (vendors and such) that we were brother and sister...and NOT a couple :-)
at September 16, 2010