Monday, August 9 2010
Now before you judge us for watching so many movies, remember that it was really hot to be outdoors. Also, the movies in Korea are definitely worth going to. On Monday, we took it easy at home and spent the day just chilling out. Around 4pm, we were ready to face the outdoors. I took Darmesh to my favourite Korean restaurant where he had Bi-bim-bap and I had Bo-ri-bap. After that, we went to watch Inception (which deserves a blog post on its own). In short, we couldn't understand why people were raving about it as much as they were. Bottom line - we didn't enjoy it. 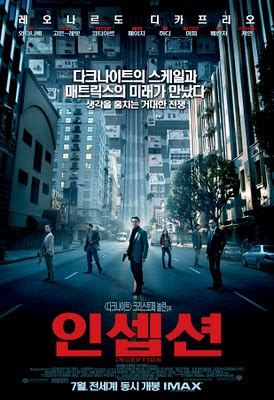 Around 9pm we went to Bucheon and again, my brother was amazed with the buzz. On a Monday night! We ended up at a nice cafe where we had a "moffle" which is basically a waffle with tiramisu. Sounds deathly divine, but was pretty light. 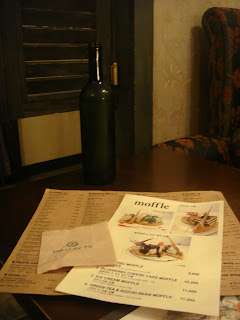 We decided to make our way back home around midnight and wanted to take a cab home. Everything was fine, until I realized that the driver had taken another turn (which I wasn't familiar with) and took a very long route to get me home. When I recognized the school that I work at (about 15-20 walk from my apartment), I told the driver that we'd get off there. So we walked home, but not to worry - it's safe. I even stopped at a shop to buy laundry softener! The good and exciting news was - my mum was arriving the following day :-)
at September 16, 2010