Wearing a bindi 'coz I'm a virgin?

Also, I have 2 co-teachers: Mr Oh and Soonhwa. Mr Oh is one of the head teachers so he sits together with the principal and vice principal at a separate table - just a few feet from where I sit. Remember everyone speaks Korean, except if a teacher is talking directly to me. The principal & vice don't speak English.

For a few years, I've been wearing a bindi everyday. I have dozens and usually match the colour to whatever I'm wearing for the day. Bindi's are a significant part of the Indian culture. For example, a red dot symbolizes that a woman is married. There are many other stories behind the bindi, but to put it simply to people - it's Indian fashion, or as I say here in Korea "Indo pashin" That is, after all, what the bindi has evolved to.

My students are always curious about my bindi's and are very observant when I don't wear one (usually on days when I'm feeling slightly out of balance with myself). 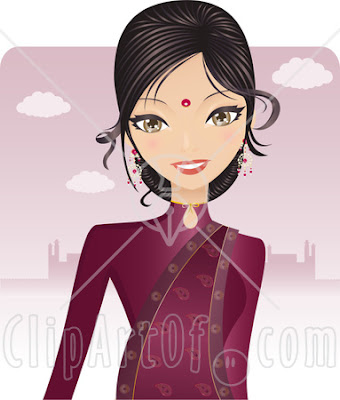 As I take my seat at lunch, the vice principal walks past saying something to me in Korean while he's pointing to the middle of his brow. He's referring to my bindi. The only word I catch in Korean is "morning" I don't understand what he's saying, and none of the other 8 teachers sitting at the table translate for me. They just sit with their heads bent and start eating their food. This frustrates me because my Korean is not that fluent to understand everything.

I greeted the vice principal this morning and he thought that I wasn't wearing one [bindi]. He assumed that I put one on before coming to lunch. He was mistaken. As he's taking his food, he starts asking questions about my bindi. One teacher tells him that I change it everyday according to what colour clothes I'm wearing. So he becomes curious about how many I have.

The principal enters and the she's invited into the conversation by the vice (about me) They take their seat next to Mr Oh. I'm trying to eat quickly because I have a deadline to meet, but I can hear snippets of the conversation from the next table. I hear "Indo-saram" (Indian person) and "Nam-Aprika" (South Africa). Of course I ask Soon-hwa if they are talking about me. She nods her head and says she'll tell me later.

When we're done with classes for the day and sitting in the office, Soon-hwa asks me about my bindi. She wants to tell me about what the principal and vice were talking about. She doesn't look very happy and says that since lunch time she has been trying to think how to tell me this.

"He (vice principal) thinks it is for burden"
"Burden?"
I can't understand her.

My vice principal thinks that I wear a bindi because I'm a virgin.

Am I hearing correctly? Those words just don't fit in a sentence together.

Apparently he went on to say that boys will probably be very happy when they see me ... knowing that I'm a virgin.

I can't believe I'm hearing this.

Soon-hwa tells me that she was very angry at lunch time, but couldn't tell me at the time. She was upset further that none of the other teachers at my table (all women) reacted to this.

She goes on to tell me that if it was said to a Korean teacher, there would be "big problems".

Why I'm pissed off

I tell my friend, Sarah - also a teacher. She doesn't react much. But that's just her. She doesn't show much emotion. And besides, she's not really surprised. To top it off - she'd rather talk about her new boyfriend. So I listen to her and show happiness and excitement for her.

But I still need to let off steam. So I head to the gym. Seo-gyun is there, but I try to ignore him. Hopefully he'll get the hint. After a while, my gym instructor comes over to me and says, "Condition down?" I want to scream - F*ck YES! I really appreciate him asking me that.

Talking about it and now writing about it, I feel a bit better. There's a lot more I want to say and elaborate on, but I will do that in another blog. There are many things going through my mind - did Soon-hwa translate correctly? What if she misunderstood?

But there are still other things that are frustrating me. I will write more about that maybe tomorrow. For now, I have to take a break and relax.

Crap... who are they to talk and judge that cos of you are virgin, boys are happy seeing you? does it happen to her (principal) when she was virgin? and as she lost it, boys are not happy to see her anymore? wtf...

he(vice) and principal both have to realise that its not being virgin/married or taken... but its the way you treat your students. and all depend What do you teach and how do you teach them, and your personality too...Look like both principals having sick mind, how can a person on such a good post in a school that teach values to kids, speak like that? are they only looking on one way (sex)?

If i m there, i would give them PC with wikipedia/google and show them the value of bindi and being an indian. And next day ask the question, and if they make mistake then they get punishment.. infront of all the kids of the school.. a tight slap on face, for not respecting a lady.

Thanks for reading this and for your words! I think that the fact that I wear a bindi or whether I'm a virgin or not has NOTHING to do with my work. It's really rough being here because as I've said, no one stands up to authority. They just suck it up and smile... I can't take that!

But I'm over it now. I've just put it down to life experience :-)

haha aww
you know, i think maybe it is just cultural interest and then misunderstanding. i'm sure they aren't trying to be disrespectful. and i guess maybe they thought, that if you are not married and wear a bindi you may be seen as fairly likely to be chaste. i don't think that they think its a bad thing, im fairly sure they value it.
its the way forward isnt it? things like this where the vice principle is probably going to learn more about the indian culture when he googles it tonight facilitates understanding between different peoples which is a good thing.
stumbled upon ur blog randomly
much love
xx

SIMPLEELEGANCE
Hello! Thanks a lot for reading this. Yeah, I'm so over it now. Whatever they thought, it's their opinion, but I'm sure you can imagine at the time I wasn't feeling very happy. Glad that's over now!