TEDx Seoul Round Up 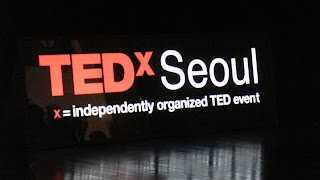 Text and Photos by Sheetal Makhan

On Saturday, November 28, 2009 about 270 people gathered at U-Plex in Sinchon, Seoul (South Korea) for the inaugural TEDx Seoul event. The theme was “Ideas Serving Humanity” and had a lineup of great speakers delivering thought-provoking presentations. It was my first experience to attend a TED function and I felt privileged to be one of the few foreigners to attend something that is held globally and boasts speakers like Bill Clinton, Sir Richard Branson, Bono and Robin Sharma.

Depending on their time zones, people around the world logged in and watched the talks on live stream. Others were being kept up to date by Tweeters at the event who were updating their Twitter status'. All talks were also translated real-time from Korean to English and vice-versa.

The speakers were: (Please click on the name to go to that page)

“Ideas Serving Humanity” was the tagline used for TEDx Seoul. It speaks about the virtue of serving people and creating value for the greater good. The event worked on a voluntary basis and was about the art of giving attention as opposed to crying out for it. Stated on the website, “It is about proactive love, unconditional giving and recognizing the beauty around us, which can only be created when one realizes one’s own inner abundance.”


TED is an annual event where some of the world’s leading thinkers and doers are invited to share what they are most passionate about. “TED” stands for Technology, Entertainment, Design — three broad subject areas that are, collectively, shaping our future. And in fact, the event is broader still, showcasing ideas that matter in any discipline. Attendees have called it “the ultimate brain spa” and “a four-day journey into the future.” The diverse audience — CEOs, scientists, creative’s, philanthropists — is almost as extraordinary as the speakers, who have included Bill Clinton, Bill Gates, Jane Goodall, Frank Gehry, Paul Simon, Sir Richard Branson, Philippe Starck and Bono.

In the spirit of ideas worth spreading, TED has created a program called TEDx. TEDx is a program of local, self-organized events that bring people together to share a TED-like experience. At TEDxSeoul, where x = independently organized TED event, TEDTalks video and live speakers combine to spark deep discussion and connection in a small group. The TED Conference provides general guidance for the TEDx program, but individual TEDx events including the one in Seoul, are self-organized. 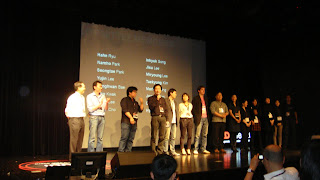 
A week later, organizer of the event, Hahnseok Ryu says that he is happy about the great success of TEDx Seoul, even though it was the first event of its kind in . For many who were involved, it was their first time and it was done on a voluntary basis. He hopes that people got to know each other and share their inspirations from the talks, as he believes this is what ultimately leads to social change.

He quotes Gandhi: “Be the change you wish to see in the world” as he talks about being part of the positive impact that TEDx Seoul has clearly had on its attendees.

The youngest attendee at the conference was a middle school student, So-jung Lim who travelled to Seoul from Daejon for the day. In keeping with the core message of TED, “Ideas are worth spreading,” Lim says that she learned that, “an idea is completely useless when you just keep it to yourself.”

Like many others, including myself, she is already waiting in eager anticipation for the next event to be held.

This was also published on The Seoul Times

Amiable dispatch and this mail helped me alot in my college assignement. Gratefulness you seeking your information.