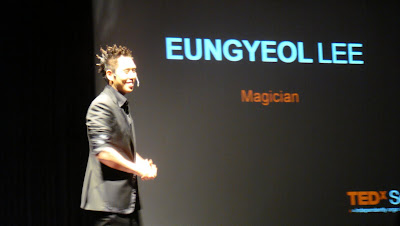 Eungyeol Lee is an award-winning magician and the first Korean to win the FISM World Champion of General Magic.


“At the young age of 21, he became the first Korean magician to perform abroad. In 2003 he was the winner of the World Magic Seminar held in Las Vegas, and in 2006 he was first Asian to place first at the World Magic Olympics. Since then he has been awarded countless major prizes proving the potential of Koreans on the global magic scene.”

Lee had the audience sitting at the edge of their seats during his performance on stage. He draw a picture of a bird on a canvas which he “turned into” a real parrot that flew into the audience. It flew back to him on stage and was placed in a “time machine” where it came out a third of its size.


This was a hit with the audience:


Go back to TEDx Seoul Round Up