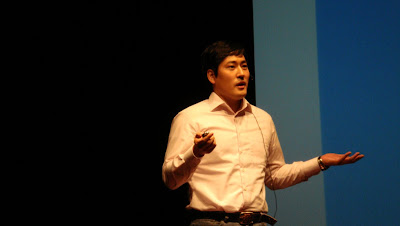 Chang W Kim is a web industry expert, blogger, and conference organizer. He dedicates himself to introducing web innovations of Korea/Asia to the world, through his blog (Web 2.0 Asia) and his contributions for various global media including CNN.


Chang says that, “Today, the is all about the virtual goods, but Koreans are used to this from the 90s.” He went on to say that Cyworld (a Korean social networking site) precedes Facebook by 5 years.


Chang impressed the audience with various statistics, one of them – “In Korea, 47% of Internet users download 55 movies a year illegally.”


He touched on the big news that the iPhone is coming out in Korea very soon and joked by saying, “...finally – at least we're beating Qatar!” The iPhone has apparently been nicknamed “the next month phone”!


Chang ended his presentation by saying that “...with iPhones and Twitter [being used increasingly in Korea], Koreans are giving a chance to global services.”


Go back to TEDx Seoul Round Up