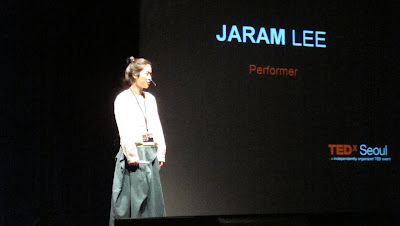 Jaram Lee is a Pansori (traditional Korean music) performer. She is passionate about storytelling and singing and says that there are many people who are like her – standing outside the fast-moving trends of the world.

“When telling a story on stage, it has to be true. It means you are living,” says Lee.

While Pansori itself is not tradition in Korea, because of the painful memories during Japanese colonial times, many Koreans talked about their bad experiences, but it was also during this time that Pansori began to be protected.


“the importance of song or performance lies in its ability to comfort pain and uplit the midst of people coming together. Not only is Pansori music, it is also a performance. It is a story that heals.”


Even though she is a traditional musician, Lee tries to adapt the traditional form of storytelling to make it relevant to today’s generation.

They say dynamite comes in small packages and if you see and hear Lee perform, you’ll understand excactly why. She was a hit with the audience and wrapped up her presentation by saying:


“Where we start from should always be the truth. What significance do we want to put into it? That’s what kindles me.”

Here is a clip of Jaram's performance: