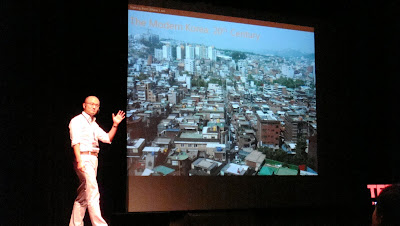 From the TEDx Seoul site:

“He first became involved in traditional Korean residential architecture or hanok (한옥) through a hanok renovation project, and now he is known as the “modern hanok” architect. His works include the modern Yeolinchek building and Chunwondang, numerous hanok projects as well as Kahwaehyun, where the modern and traditional are brought together. These works have been published in a monograph entitled “The Return of Hanok”


Hwang says that, “When the western barbarians invade us, not to fight with them is to reconcile and to reconcile is to deceive your own country.” He spoke a lot about modernization and westernization saying that, “to learn something from the outside world is to be re-born.”


Speaking of Korea in the 20th century:

Everything we wear and eat changed

We became part of a global community

We lost many things (not only hanoks)"