My first week of English camp is over, and I have to do some damage control.

EFL teachers will agree that lesson plans don't always work out as well as they seem on paper. Many times, I had to think on my feet and alter the lesson plans to suit the class. Also, children vary - I had a mixture of classes...either very lethargic or way too energetic.

Some activities that worked are the ones below. I had various body parts written on Post It's and had the children label a "model". They had fun with this one, although I had trouble trying to keep the 'model' still! 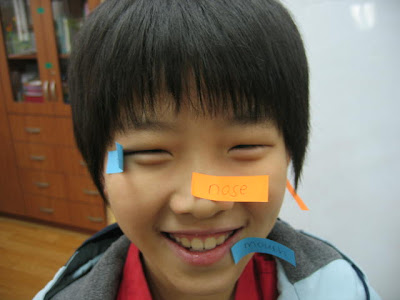 Korean kids love the cartoon character, Spongebob Squarepants so when I taught shapes, I had them draw Spongebob! (That's my drawing on the board...not too bad, eh ^^) 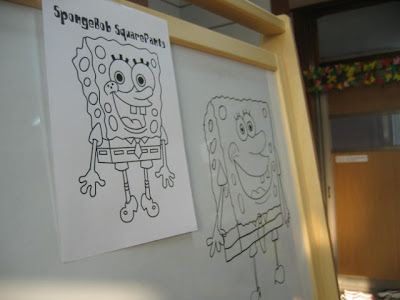 For my 6th graders, I was teaching them adjectives, so in pairs, I had them create their very own cartoon character with 'special powers' and they had to present their new superhero to the class - saying why he/she was so special... 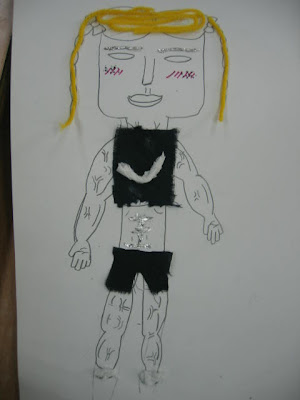 This was by far the most popular. When I taught prepositions to the classes (all grades), I had candy all over the classroom - under the chairs & tables, behind pot plants, on the window, on the mirror, next to the computer etc... The kids had to search for the candy, and come and tell me where they found it. Eg, "The candy was behind the computer" 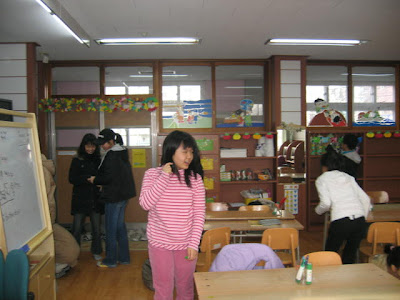 Hello. This post is likeable, and your blog is very interesting, congratulations :-). I will add in my blogroll =). If possible gives a last there on my site, it is about the CresceNet, I hope you enjoy. The address is http://www.provedorcrescenet.com . A hug.

crescenet
hello :) thank you for the message! glad you like my blog...i'll be visiting yours too ^^*