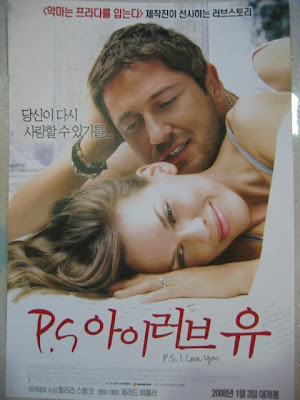 I've always been a bit iffy about novel-turned movies. I've read a few good novels that were sooner or later made into films. Most of them did not live up to its written counterpart.

P.S. I love you is the latest film that was made from a novel I read a few years ago (written by Irish novelist, Cecilia Ahern).

It stars Hilary Swank and Gerard Butler in the lead roles. The story revolves around Holly (Swank) who, on her 30th birthday, discovers that her late husband (Butler) has left 10 letters for her. Each letter ends with a "P.S. - I love you" His intention was to ease her pain during the mourning of his death. He surprises Holly with various things, including a trip to Ireland - where the two first met.

I felt like the character's weren't established enough. Viewer's are just left speculating about the couple's marriage before his untimely death based on flashbacks now and again.

The supporting cast include Lisa Kudrow, Kathy Bates and Jeffery Dean Morgan - whose character seemed intriguing, but turned out to be rather bland.

The film seemed rushed. Various characters were introduced to us and disappeared after a few scenes. After thoroughly enjoying the novel, I was interested to see how the film turned out, but I wasn't impressed. Sub-plots either needed to be cut, or the film needed to be extended (with an intermission).

Maybe it won't be too long before there's a Bollywood adaptation of it! 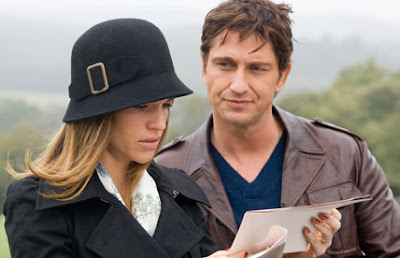 ivan
thanks for stopping by ^^*