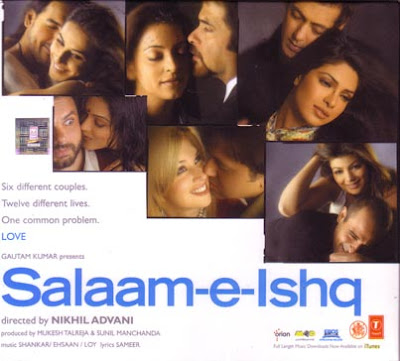 from google images
I've been out of the Bollywood scene for a few months, so I'm well aware that Salaam-E-Ishq is "old", but I recently watched it on DVD and now I'm so regretting it.

The film is poor - mainly because there are just too many plots happening at the same time.

I fast-forwarded through almost the entire film...the only story I could bare to watch was the John-Vidya story. They're married and in love when Vidya loses her memory in an accident.

The Anil-Juhi-Anjana story had potential, but it clearly wasn't carried through. It spoke of a real subject... a middle aged man who nearly succumbs to the temptations by a younger girl.

The story between Sohail-Isha are a waste of time, as are Salman-Priyanka's. Even the Govinda-Shanon story was lame... she travels from Canada to India to stop her Indian boyfriend from getting married... and in the interim, falls in love with her cab driver.

Some of the dialogues are just way over the top and cheesy. The only thing that was worth seeing was the song/dance items.

SEI was so disappointing! Like you, I did really love the songs, though. Before I saw the movie, I bought the soundtrack and listened to the title song over and over again, and I liked it even more in the movie.