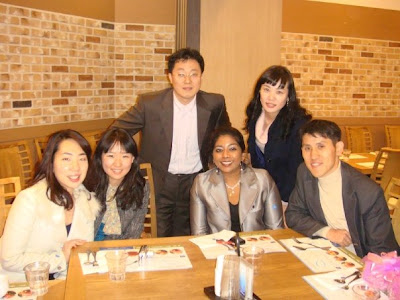 I was almost sure that Kim had more exciting news to tell me over dinner last night. After all, we hadn't seen each other in over a month. So I said, "C'mon... what else happened while I was away?!" I knew she had something to tell me, judging from her tone on the phone.

She smiles, turns her head to the side and in a dramatic fashion, she says, "I got a plastic surgery!"

"You got WHAT now?" My mind was racing as to what kind of surgery she had done. She'd better not ask me to "Guess where?" 'cause for the past 25 mins, everything seemed to be in tact since the last time I'd seen her.

Kim covered her mouth as she giggled at my reaction.

I thought - Ohmygod, please don't be doing this to me! What if I say the wrong thing? Well, her nose seemed fine and I was scanning her face for any scars or unusual marks. But - nothing!

So Kim points to her eyes. She explained to me that she had some 'fat' removed from under her eyes as they seemed to be a bit "heavy" and now her skin is "more smooth"

Apparently it was a simple procedure (just an hour). She used her 3-day holiday to have it done.

"It was so painful after", she said. She went on to tell me about blood and bandages and all that .... I don't know 'bout you, but when "blood" and "eyes" are in the same sentence, it freaks me out just a lil' bit!

I didn't want to dampen her spirits and make her feel as though no one would notice, but I said to her in the best possible way - "Well, it means it was a job well done if it's not noticeable ...AND...as far as I'm concerned - you were beautiful before, and you're beautiful now!"

She put her hands together and dropped her head saying, "Thank you very much!"

Kim has appeared in a few of my stories on here, and if you've been following you'd realize that she can be slightly dramatic, yes?!

She sighed. Put her hands to her chest. Threw her head back and said, "I want to be young!"

Kim is in her mid-40s and for a single mum of THREE sons, the woman looks DAMN GOOD. Her body, along with her spirit could easily pass for someone in their late-20s or early-30s.

Two days before this, I'd heard of another teacher at my school who had the same procedure done.

Some Koreans I've met for the first time have almost always made some mention of my eyes. "Wow! So beeeg!" My students have even said to me, "Teacher eyes very beeeg!" (So I tell them that they're big so that I can see *everything* in class - including students at the back of the classroom trying to play games on their cellphones under their desks!)

When our current school principal arrived at the beginning of the year, she leaned in right to my face examining my eyes. She questioned me about all the eye make-up I use and was amazed to know that I don't use mascara.

Korean women have this fascination with eyelids and long for "deep eyes" (like mine...apparently).

Today at lunch, I sat with Mi-na the music teacher. I asked her what her plans were for the week-end. She said she will go to the "maa-saa-gee shop" In other words, she was going to a beauty salon for a facial, which in Korea is known as a "face massage" or in Konglish - "pay-eess maa-saa-gee"

I told Mi-na that she has beautiful skin and that she's always looking radiant. She was very happy to hear that, but went onto say that she isn't feeling very "bright" with her skin these days.

And then she said, "You know...all Korean women want to be young!"

So many of my Korean colleagues have flawless, milky skin. Wow! When I say "flawless", I mean not a blemish to be seen. They're *so* lucky, I always used to say. Until one day, another friend / colleague (Sarah) pointed out that So-and-So-Teacher had "work done" which is *why* she has skin resembling a baby's bottom.

I know of another colleague who goes for regular laser hair removal treatment - not that Koreans have that much body hair (but that's for another post) I also know of many ladies who have had eyebrow / eye liner / lip liner tattoos done. Of course, they don't make a big hoo-haa about the procedures they undergo, but are often the envy of many friends who also long to look young for as long as possible!

Going under the knife is very common here in Korea. Celebrities in their 40s, 50s and above do it as though it's the most natural thing ever. And the thing is, it *looks* so natural. Their skin looks extremely supple and healthy and doesn't really leave them looking like some messed up procedures I've seen before.

Some of my Korean friends also tell me that they are envious of my "high nose". And... another thing most of my Korean lady friends tell me is that they wish they had more ("zig zag action across their chests")

Kim told me she'd be going back to have her eyelids done. She (along with many other Korean women) long for deep eye sockets.

Well, I say - whatever makes you happy :)

So I thought *that* was Kim's big news. I guessed we'd be wrapping up dinner and heading home soon, but then she says to me: "I think you have a secret, and I have a secret!"

I have no secret.

I sit back and wait for her to tell me the rest of her news. She just looks at me and grins. And I know immediately what's happened.

They are looking nice and beautiful in pics, why they want to do more patch up? I heard this before also, korean women are going more for plastic surgery, even teenagers.. I wish i was Plastic surgeon, i can make mil in korea.. :)

i loved the kim story but she looked lovely the way she was. i dont think she needs to do anything else. well i want to know all about kim's new guy in the next posting ok.

Today I have been to Seoul, on buses and trains and just walking around. I had read this blog this morning about the 'fat under the eye surgery' and took the travel opportunities to examine the eyes of many of the young woman on the buses and trains. Many have no 'fat' under their eyes, some do and obviously need to have it removed immediately. What I did notice is how much surgery the Korean male needs to have done in order to keep his surgeryed up Korean female interested in him.

@ Wareham:
Thanks so much :) So observant of you! Hehehe x

@ Chetan:
I agree - I also think they're beautiful!