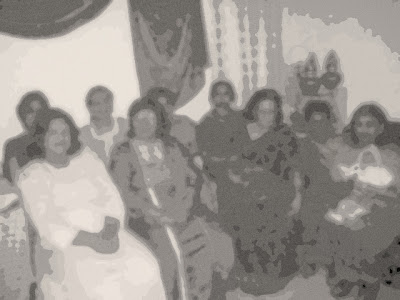 A few months ago when I was in South Africa, I casually made mention of a friend to two aunties. This friend is an Indian guy from my hometown, but was also abroad for a year.

He was a cool "buddy ol' pal" and I was happy that I'd met someone with similar interests who I could chat to, especially since I don't have many INDIAN guy friends (I refer to my previous blog posts, Ranting on Desi Boys Part 1 and Part 2)

Let's call the two aunties Jo & Flo.
Like I said, I casually mentioned my friend to Jo & Flo. Note I said he was Indian and he was about the same age as me (they asked me about his age). Their ears perked and I got questioned left and right about this person.

Also note: I said he was a friend, not a "friend".

What's the difference? Well, I have recently learned that when it comes to guys, Jo & Flo don't (or can't?) distinguish between a friend and a "friend".

If a girl has dated many guys, Jo & Flo will tell you that She's had many 'friends'

I have "many FRIENDS" I have friends who are ladies, guys, gentlemen, not-so-gentlemen, gay and lesbian, bi-sexual, married men and women, Ummmm...need I go on?

A few weeks ago when I was at home, I was speaking to Flo on the phone.

Flo: ...and how's your "friend"?
Me: Which one? (Like, duuuhhh)
Flo: Your "friend" who was overseas
Me: But which one? (Of course I knew what she was getting at)
Flo: That Indian boy.
Grrrrrrrrrrr
Me: Um, I don't know...we haven't talked.
Flo: Oh, you haven't seen him?

Of course, to anyone else this sounds like a very innocent question and friendly inquiry about my friend. But Flo didn't mean friend. She meant "friend". And he wasn't a "friend"

Why can't people just call it what it is?

But you know what really grates my carrot? When people, including Indian aunties like Jo & Flo call boyfriends (or girlfriends for that matter) "Special" Friends.

I have special friends...people who I'd call before others to share exciting news with and who are close to me. My special friends are comprised of both sexes and of different backgrounds.

My mother was married when she was my age. Of course, times are different and "that" age is way too young now! But - as each day passes, I'm getting a day older. My parents have never suggested I settled down anytime soon.

Someone recently called me a "free spirit". Am I? I get a thrill from travel. Exotic locations. Getting lost. Finding myself in situations which are scary at the time, but will make for an AWESOME conversation piece one day, like: "This one time I was in the Philippines, and I ended up in a gay strip club, and ...." Get my drift?

But you see, just before I left SA, Flo told me that I need to "come home" after my contract has expired. My reply to her? "...you mean, come home, get married and have children?"

That IS of course, what she meant. And please don't tell me it's not. I know Flo all too well.

Perhaps the likes of Jo & Flo have my best interest at heart, but in all due respect, they don't know me and how I've been raised. I'm so grateful to have been raised by parents who encouraged my brother and I to seize opportunities and to make a name for ourselves. They've been nothing but supportive and a true backbone to us. And I'm confident I speak for my brother as well.

If the Big Boss Upstairs has marriage for me in the future, I can't escape it. It's meant to be. But for now, I wish Jo & Flo would let me continue rolling around like a ball of fire till I'm ready to cool off and 'settle down'

However, perhaps when that time comes, there'll be no more "nice Indian boys" around, according to Jo & Flo.

I've often joked that I'm going to tell the aunties that I've met a WONDERFUL man who adores me and treats me like a queen. Only flaw (according to Jo & Flo)? He ain't Indian. Daaayuum, now THAT would really send them over the edge and I'm probably going to be disowned!

Sheetal, I know all about those Indian aunties. As much as i love them they can def be a tad bit irritating especially when it comes to marriage and in my case, being gay. They just think i am like really happy. Mwah.S

Sean, LOL @ "They just think I am like really happy" Yes, I think we all have aunties like this in our family :) xo

i had to read this story again and it really brought a smile to my face. i enjoyed it so much. i know those aunties sheetal. jo and flo are really flo.