One of my favourite writer's (Barbara Hollands) interviewed my favourite DJ (DJ Damage). The article ran in The Weekend Post ~

It just so happens that this DJ is also my brother :) By now, y'all know that I'm probably his biggest fan. And while I may be biased, I can confidently say - damn ... this guy can make anyone jump up and move! He's almost on his way to Gauteng where he will take part in the final round of the national DJ competition, THE NEXT BIG THING. He'll be representing the Eastern Cape ~!! Wooohooo!

I am *so* proud of how far he's come. I know how much this means to him and if anyone knows the passion he has about this, trust me ... it's ME!

The Grand Finale
will be LIVE
on Saturday, July 18 2009
@ 10pm
on Channel O & SABC 1
*Viewers and fans will be able to text their vote that night*
Damage beats his way to stardom
2009/07/14
Barbara Hollands EAST LONDON CORRESPONDENT 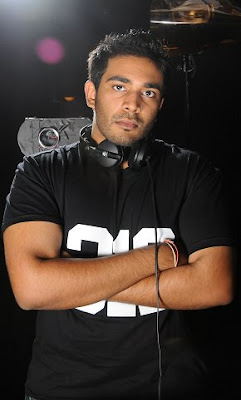 HANDS ON DECK: East London‘s Darmesh Makhan,
also known as DJ Damage, is the only Eastern Cape
contestant to make it into the finals of
television talent contest The Next Big Thing.

A YOUNG Eastern Cape man with a passion for mixing music has been chosen to represent the province in a national DJ competition which will be televised live next Saturday night.

Darmesh Makhan, 22, who goes by the name DJ Damage, is the only Eastern Cape entrant to reach the finals of The Next Big Thing, an annual competition run by Channel O and SABC1.

Describing the competition as an “Idols for DJs”, Makhan said his unique music mixes were a hit with viewers who voted him into the final stage of the competition.

“I think I‘m different from the other four finalists who are from Gauteng, the Western Cape and KZN because they play mostly house music and I play everything from old-school stuff like Greased Lightning to the latest hip-hop.

Makhan matriculated at Selborne College before joining his father‘s media company where he works as a layout artist.

His interest in DJ-ing was aroused when he saw hot South African DJ Ready D on television‘s Phat Joe Show.

“I was just 16 but when I saw Ready D and what he was doing to the crowd, I knew that was what I wanted to do. I started building up my music collection. My school friends nicknamed me DJ Damage and I decided to roll with that name.”

On his eighteenth birthday, his parents gave him his first pair of decks and the young DJ started teaching himself the skills of mixing music from his Braelyn home.

Now DJ Damage, who regularly amps up the atmosphere at Numbers Dance Club and corporate gigs around East London, is becoming a household name nationally. He often sends mixes to the Fresh Drive on 5fm, which are played on the Ultimix at 6 and also has residency on the Friday Night Fix on the same station on most Friday nights.

Last year his father encouraged him to enter The Next Big Thing competition, but he only made it to the semi-finals. This time around, DJ Damage is hell-bent on winning.

“I just had to try again, so I sent a 12-minute mix and when I made the semi-finals they flew me to Jo‘burg and we were televised live. It was nerve-racking, especially when they told me just before that a million people were watching, but after a while I just ignored the cameras.”

He was “speechless” when he was called live on air to be told he was one of five DJs through to the finals and is now busy mixing an earth-shattering 14-minute set for the finals next week which will be broadcast at 10pm.

If he wins, he will enjoy a seven-day working cruise to the Seychelles where he will play at a variety of nightclubs, a recording contract and a state-of-the-art DJ rig.

“I want to bring this home to the Eastern Cape to show there is talent in small cities.

“People ask me if I‘m not intimidated by the Jo‘burg and Cape Town guys, but I tell them they are the ones who should be scared of the small town guys.”

Wow! Awesome for him!