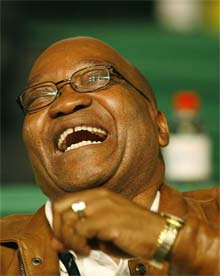 A man who has been described as 'scandal-plagued' has been elected as the new president of the African National Congress (ANC).

In Polokwane yesterday, Jacob Zuma won with 2,329 votes to President Thabo Mbeki's 1,505. Last year, Zuma ruled headlines with his alleged rape and bribery charges. And now, he is in the forefront of leading South Africa in 2009.
at December 19, 2007