I probably wouldn’t have been able to type this a few hours ago, but luckily I am able to share my days events with you. Hell, I even managed to take a few pics!

So around 12-ish this afternoon, I met Sean and Maire and the three of us made our way to town. We were first going to Checkers, and then we were going to have lunch somewhere. It was Dulces vs Juice Bar.

After spending about 15 minutes in Checkers, the three of us walked out of the centre as we tried to make up our mind where to go for lunch. Juice Bar (which is only ten feet away) or Dulces (across the road).

So, Juice Bar it was. But Maire decided to go home, so it was just Sean and I. As I was looking for a place to sit, I noticed a young man trying to get my attention. I thought he was telling me that I need to order the food at the counter before sitting down!

Well, I soon realized that wasn’t the case.

He came to tell me that someone had taken my purse out of my bag and had run away. For a few seconds, I didn’t take him seriously. But when I checked my bag and noticed that my purse was gone, I became frantic. I yelled at the guy to run after the little sh*t who got away. The guy came back to me saying that my money was already being distributed amongst a group of guys.

I ran down to where these guys were and yelled at a few guards who were lingering about to catch the guys who were just a few meters away from me. Meanwhile, the guy who had come to tell me about this, ran after the group, but someone had kicked him and ran away – with my purse.

However, the guard caught a 15-year-old boy, and I was told that he was the one who had actually taken my purse. As the guard held him, I could see money in his hands.

I could not believe how frantic I became. I was shaking….this had never happened to me before. As the guard held him by his arm, I yelled at him demanding my purse and money back. He swore he didn’t have it. Obviously he was lying and I grabbed the money from him. (I had over R300 in my purse, but got back about R180) 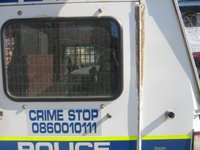 The guard took him into the store and said I should call the police. Meanwhile, I wanted the little sh*t to be kept under a watchful eye – I was so convinced he was going to run away. After much yelling and strange stares from shoppers in the store - who had no idea what was going on, believe it or not – the guard actually locked the boy away somewhere in the stock room until the police came.

While waiting for the police, I was in contact with my mum. At times I was just so angry that I couldn’t speak. Thank God that Sean was with me and he was updating my mum on what was going on.

I wasn't in the right frame of mind when I called the police and said that my purse had been stolen out of my wallet!

So the police finally came and they locked the little sh*t up in a police van. Before they put him in I yelled at him again and warned him to go with the police to where ever his friends were to get my damn purse back. As the little pocket picker sat in the back of the police van, he asked to speak to me. He said he'd promise to get my purse back. 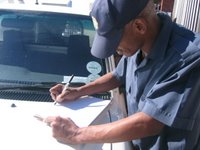 How do I believe him? Oh...and while he was speaking to me from the back of the police van, I made sure not to get too close to him - just in case he spat in my face or something (You never know...I've seen these things happen in the movies!)

Anyway, the police opened a case and I gave a statement. I don't have much confidence that anything drastic will be done, but I still went through the necessary procedures. 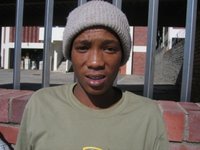 Meanwhile, the honest and helpful person who came to tell me about this all was a 19-year old Grahamstown resident, Craig. I was so appreciative...not only for him coming to tell me about this, but for actually running after the guys. Many people would be too scared to get involved in a 'crime scene' as they're putting their own lives at risk.

I feel like I’ve been made a fool out of.

My heart always aches as I walk down High Street and see these street children begging for money or food. Often, while walking by I’ll give them a fruit or a yoghurt that I was keeping as a snack.

And I also feel like I’ve been made a fool out of because I try to be so positive about this country.

I know that we live in one of the most dangerous countries in the world. A country where our newspapers bleed with headlines of rape, murder, hijacks and robbery. It’s never-ending.

But still…when I hear people complain about South Africa, it grates my nerves. I always think – "if you hate the place so much, get out of here!" I’m always defending this country, despite all the nastiness that surrounds me everyday.

Another incident that happened last week which dampened my spirit beyond words is something that happened to relatives of someone very close to me. His uncle and aunt were attacked in their home at 19:30 by several men. They were robbed, beaten and told in no uncertain way that they would be back.

This angers me. It angers me to the point where I want to just scream.

Isn’t it enough that we have natural disasters killing us already? Tsunamis…..forest fires…..floods…..dammit, even the cold weather is killing people. Do we really have to fear another human being?

I know we don’t live in a perfect world. Trust me, I’m in the Journalism field - I know this fact already.

But holy crap - today blew my mind away. I still can't believe something like this happened to me, but as my friend, Himesh said - I'm lucky...it could have been a lot worse!

Email ThisBlogThis!Share to TwitterShare to FacebookShare to Pinterest
Labels: grahamstown

ahh
Never a dull moment, i had a taste of South Africa last night by going to see Ladysmith Black not quite the same but its good to hear that you are helping the unemployed and disadvantaged. Remember it sometimes takes a crucible to separate the good from the bad.

Sheets, I can just imagine how you must have felt. You have all these emotions... I dont like giving beggars money, but I've also noticed that if you actually go into the shop and buy them food, that they are trully ungrateful. I just give them a deaf ear. I know it sounds terrible, but ya, that's our South Africa for you. I'll be honest, I'm not proud to be South African.

(wish I knew who you were!)

sheetal my love im so sorry, i woul dhav ebeaten the little sh*t to badly he would have confessed all his sins. u know i can be violent at times. im sorry u had to go through that experience. so did u thank craig? i would have had lunch with him, to show my gratitude. its not every man who will watch out for u. but im glad sean was there. u such a drama queen arent u. i know at the moment u wouldnt have said that. we had thieves coming to my digs thrice is a row, so i have no mercy for them. its so unfair to take what u didnt work for.

Colleta, you know what they say - what doesn't kill you only makes you stronger! Yes, I thanked Craig profusely. I gave him some of the money that I got back from that little SH*T! The world needs more honest people like him. I didn't know about the theives + digs story..?

You know, as crazy as this sounds, I felt so relaxed last night - despite what happened during the day. I think all my built up stress over the past week or so was finally released when I yelled at that little sh*t!

It really feels good to let go...don't worry about who's watching you or judging you. You can deal with them later. Or don't even bother! :)

Hey Sheets,
sounds like you kicked ass and handled the situation really well. Thank goodness you didn't get hurt, and thank you for telling your story - I think it makes everyone realise how things can happen so quickly and we all have to be very careful. But well done girl!

Wow sheets...I'm just so glad that you are okay! When you sms'd me the other day and said you had a bad day I didn't know what had actually happened. It's a lot to handle, and I'm sure that you are very shaken about the incident! This has never happened to me, but other close friends, like Candice, have experienced it! It just opens our eyes to the reality that no matter how beautiful the country is portrayed in the media or how we see it before something like this happens to us or someone we know, the problem of crime is still prevailent. Until something is done and the poverty gap is closed we have to be vigilant and watch our purses - it's a harsh reality! I'm so sorry this has happened to you, sweets! In the words of Bron: Be strong!

Hey Sheetal, my neetal :) You got the little thief...you go girl! I'm so proud of how you handled yourself - Sheetal on patrol...watch out!

I've had my wallet stolen from my gym bag while I was working out, which was awful because the perpetrator will probably never be caught. I know how violated and angry it made me! I'm sorry that something similar happened to you.

wow thats a lot of drama! Looks like you were great under such a stressful condition!
Take care

The week has (finally) come to an end. I havn't been able to get hold of the Police Staton in Grahamstown - can you believe it?... I need to know what happened to the little bugger. I'm sure he was released minutes after the police took him away.

Meanwhile, I have to go through the process of getting new cards etc.. what a pain!

I called the police station on Friday to see if anything had been done about my little mugging episode.

Apparently, no investigative officer has even been assigned to my case.

...and Sean (who was with me when it happened) told me that the little bugger is on the street again. Sean saw him near the same spot where the incident took place.

Seriously, as petty as crimes like this may be, our punishment laws really need to be beefed up!