As the third term slowly draws to an end, stress levels are at its peak. There's just so much to do and time is running out! By the end of the term, I would have completed the following:
If you're thinking..."It doesn't seem all that bad...", think again! I am counting down the days till I get to go home and do whatever I want for two weeks straight.

Long and late hours editing in the TV studio can be tedious. So when the clock strikes 12, or just a few minutes before, it's understandable that some people begin acting a bit...strange. Either running or jumping around or finding the most random thing hilarious and bursting into giggles about it (that would be me).

Here is a glimpse of one of my crew members on the "verge" of losing it. This is him looking for a piece of his watch that snapped when he fell of a chair, while the rest of us were killing ourselves with laughter in our edit suite.... If only I had my camera out sooner! 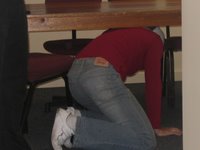 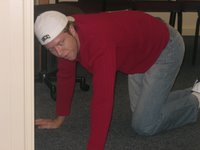 I SAID NICE ASS MAN - this time its not annonymous! hehe. Rowan / Jayme (that shld mix things up a bit!!)

Ha ha ha. Nice one sheets. Got me at my most vulnerable. late at night.

i love your facial expression in the second one!

So im trying to get hold of Jay but i cant leave a msg on her stupid myspace thing. GRRR