It's 01:30 and I'm listening to the soundtrack of Kabhi Alvida Naa Kehna (KANK). This is probably one of the most awaited films of the year. Karan Johar has once again managed to rope in a golden cast for his film and boasts names like Amitabh Bachan, Abishek Bachan, Shah Rukh Khan and Preity Zinta. It's interesting to note that all these actors have starred in Johar's earlier films, like Kuch Kuch Hota Hai, Khabi Khushi Khabi Gham and Kal Ho Na Ho.

Bollywood films can usually be rated according to the success and ratings of the soundtrack. By the sounds of things, KANK is going to be a smashing hit with avid Bollywood fans around the world.

My favourite songs on the album are the first three songs - the title track, Mitwa and Where's the party tonight? Music is composed by the brilliant trio, Shankar-Ehsaan-Loy and lyrics are penned by Javed Akhtar.

The third song, Where's the party tonight? is sung by Shaan and Vasundhara Das. It sounds remarkably like It's the time to disco from Kal Ho Naa Ho. In my opinion, Shankar-Ehsaan-Loy have created ma

gic with this song. I'm absolutely loving it, and if my brother were here, he'd be saying "you're killing the song" because I am playing it over and over again. I don't know who the song is picturised on, but I'm sure it's going to be fantastic!

The story of KANK revolves around the bonds of marriage and all the emotions that go with it. Just listening to the title track; sung by Sonu Nigam and Alka Yagnik, I can almost see Shah Rukh Khan with tears streaming down his face. Now he is one of the very few people who can actually make me cry just by watching him cry! No wonder the man is known as Bollywood's King! 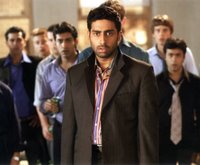 Judging by the film stills, the leading ladies - Rani and Preity look ravishing, while Shah Rukh Khan and Abishek Bachan look like my prince charmings!

The cast and crew of KANK spent about 90 days shooting in New York - where the film is set. My friend, Amar who lives in NY was lucky enough to play one of the extras in the film.

Here are a few photo's Amar sent me which he took while he was on the sets. 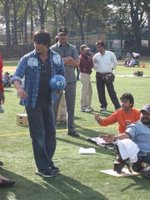 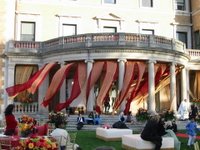 One of the sets 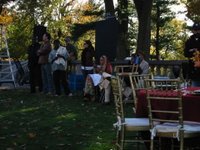 Not sure if that's Rani or Preity and Amitabh 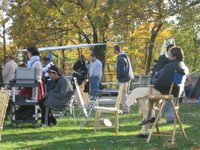 You have my taste buds watering. You know that I go weak in the knees for SRK. He can leave he's shoes under my bed any day (lol)
Where can I get my hands on a copy of this movie when it comes out. I want my own copy to add to my collection.

I knew you'd be drooling over SRK ;) The DVD will probably only be out in September or October. I'll let you know when/how you can get a copy. It's definitely a collectors item!

Hey Sheetal nice pics:) Personally I didnt care much for the music cos it has shades of Kal Ho Na Kal. Wheres the part y sounds like Its a Time To Disco, Rock n Roll has beats akin to Pretty Women and the title track is a throwback to the KHNH's title song.

il give this movie a try coz i actually like Rani....

Apparently, there are a few guest star appearances in this film. I've seen the trailor and it looks damn good!

hi...I think Hrithik Roshan and Aishwariya had sexual affair. Please let us know if it's true.

Can you let us know if Hrithik and Aishwariya had an affair? For Hrithik's wife Suzanne Khan....(muslim) was away while Hrithik and Aish were shooting? Convenient isn't it. I hear she (suzanne khan) was in Italy. Coincidence? or planned?